To
All General secretaries/CHQ Office Bearers
All Circle/Divisional and Branch secretaries of all NFPE/FNPO unions.

After detailed discussion it was decided that along with NJCA programme , the following programme will be  organized on Postal   Charter of demands as mentioned below :
CHARTER OF DEMANDS
1.         Settle all 7th CPC related demands submitted by NJCA.

2.         Grant of Civil Servant status and all benefits of Departmental employees on pro-rata basis to Gramin Dak Sewaks.

3.         Upgradation of Pay Scales of various cadres of Postal department by modifying the retrograde recommendations of the 7th CPC.

5.         Filling up of all vacant posts by conducting special recruitment in all Cadres of Department of Posts.

A joint letter by both Federations will be submitted to Secretary Department of Post on Pay commission  related issues and Cadre restructuring , 7 Point Charter of demands and Memorandum will be submitted  on 11thMarch 2016.
To mobilize and make the demands popular among the members, the following campaign programme will be launched by NJCA leaders in the following state capitals as mentioned below:

To
The Secretary,
Department of Posts’
Dak Bhawan, New Delhi-110 001

1.         The Finance ministry has constituted an implementation cell which will function as the Sectt. of the empowered Committee headed by  Cabinet Secretary in which  Secretary , Department of Post is also a member.

2.         As per the minutes of implementation cell held on 2nd February, Nodal Officers from our Department has not attended, it is reliably learnt.

3.         The implementation cell has fixed two weeks time for submission of any Departmental specific  Modification on 7th CPC recommendations but it is  learnt  that Nodal Officer appointed  by the  Department is out of Delhi and will be returning after 12th February , by that time, there will be  4 days time left  for cutoff date fixed by implementation cell..

4.         Further minutes says that any modification recommended by the Secretary Posts should be approved by the Minister (C) also before submission to implementation cell. We feel that if action is not taken on war footing it will be impossible for the Postal Department to submit modification proposal to the implementation cell after completing all the above formalities before the cutoff date

5.         Regarding  Cadre Restructuring  also if orders  are not issued before implementation of Pay Commissions report, there is every chance of returning the proposal by DOP&T  for  resubmission after signing fresh  agreement  taking in to consideration the 7th CPC  orders issued  by the Government.

In view of the above we request you to kindly act immediately to safe guard the interests of Postal Employees without giving room for any delay or omission or commission on the part of Postal Department.

To
All Constituents of NJCA
Dear Comrade

The NJCA met on 08.02.2016 as scheduled. The meeting after taking into account various factors decided that the proposed indefinite strike will commence from 11.04.2016 if no settlement is brought about on the charter of demands by that time. The meeting also took the following decisions.

1.    Strike notice will be served by the NJCA and all its constituents on 11.03.2016 by holding massive demonstration.
2.    There will be a massive Rally on 11.03.2016 at Delhi and leaders of NJCA will make it possible to attend the said rally and the strike notice will be served on Cabinet Secretary, Government of India.
3.    All the National JCA leaders will attend Rally at the State Capitals/big industrial centres during the month March and April, 2016. Dates will be finalised in consultation with the concerned State JCA.
4.    To strengthen the campaign, the NJCA will place on the website a pamphlet explaining the demands.
5.    Posters will be centrally designed and kept in the website for State JCAs and constituents to adopt.
6.    All Constituents will undertake independent campaign programmes in the month of March 2016 to popularize the demands.
7.    29th March will be observed as solidarity day throughout the country unitedly by all the Constituents of NJCA.
8.    The indefinite strike will commence at 6 am on 11.04.2016.
9.    The updated Charter of Demands on which the indefinite strike is to be organized is enclosed.
10. The Constituent organizations may add sectional demands as Part B of the Charter of Demands of the NJCA
The National JCA appeals all constituents to make intensive campaigns to make the strike an unprecedented success.
With greetings,
Yours fraternally,
(Shiva Gopal Mishra)
Convener
Charter of Demands
1.    Settle the issues raised by the NJCA on the recommendations of the 7 CPC sent to Cabinet Secretary vide letter dated 10th December 2015
2.    Remove the injustice done in the assignment of pay scales to technical/safety categories etc. in Railways& Defence, different categories in other Central Govt establishments by the 7 CPC
3.    Scrap the PFRDA Act and NPS and grant Pension/family Pension to all CG employees under CCS (Pension) Rules, 1972 & Railways Pension Rules, 1993
4.    i) No privatization, /outsourcing/contractorisation of governmental functions
ii) Treat GDS as Civil Servants and extend proportional benefit on pension and allowances to the GDS
5.    No FDI in Railways & Defence; No corporatization of Defence Production Units and Postal Department.
6.    Fill up all vacant posts in the government departments, lift the ban on creation of posts; Regularise the casual/contract workers
7.    Remove ceiling on compassionate ground appointments
8.    Extend the benefit of Bonus Act,1965 amendment on enhancement of payment ceiling to the adhoc Bonus/PLB of Central Government employees with effect from the Financial year 2014-15
9.    Ensure Five promotions in the service career of an employee
10. Do not amend Labour Laws in the name of Labour Reforms which will take away the existing benefits to the workers
11. Revive JCM functioning at all levels
________________________________________________________________________
To
Cabinet Secretary,
Government of India &
Chairman,
National Council/JCM
Dear Sir
Subject: 7th CPC recommendations – Reg.
We have written under the cover of the NJCA’s letter in No JJCA/2015/7th CPC dated 11th December 2015 our comprehensive suggestions for effecting changes in the recommendations of the 7th CPC. This was also subjected to discussion with the JS (A) of DOPT on 11.12.2015 in response to the letter in No 3/1/2015-JCA dated 10-12-2015.
We request that the same may be treated as the consensus view of the Staff Side, JCM/National Council.

All the leaders, Guests and CWC members including CHQ office bearers, Circle Secretaries and Mahila Committee Members were welcomed and honoured by the Reception Committee under leadership of Com. Jagdish Dhiman, Circle Secretary P3 Punjab and Com. Laxman Singh, Circle President, P3, Punjab by garlanding shawls and presenting momentos.
The meeting was presided over by Com. S. A. R. Mazgaonkar, Working President as Com. J. Ramamurthy, President could not come due to marriages in his family. Com. Jagdish Dhiman, Circle Secretary, Punjab delivered welcome speech. Com. R. N. Parashar General Secretary welcomed all leaders, guests and CWC members and visitors who participated in the meeting and delivered introductory speech.

Com. M. Krishnan, Secretary General, Confederation inaugurated the CWC. During his inaugural speech. He elaborately described the pay commission related issues including sectional issues of Postal and emphasized the need of united struggle to achieve the justified demands and to resist the onslaughts on working class in the wake of neo-liberal economic policies.
After that discussion started on agenda items of CWC. Com. R. N. Parashar, General Secretary presented draft report on the activities of P3 CHQ.
Com. R. Seethalakshmi, General Secretary, P4 and Com. K. P. Singh, Deputy General Secretary, R-3, Com. P. Pandurangarao, General Secretary, AIPEU GDS(NFPE) also graced the occasion by delivering their speeches and conveyed best wishes for the success of CWC and extended solidarity with P3 for ensuing struggles. Every leader stressed the need of formation of GDS Union.

In the afternoon of 06.02.2016 Hon’ble Mayor of Chandigarh Municipl Corporation participated in the meeting and he delivered his speech and welcomed all. Com. Raghunath, General Secretary CITU Punjab state also addressed the meeting. During the speech he very nicely presented his views about the adverse effect of neo-liberal economic policies on working class in general and central Government employees and postal workers in particular.

Com. K. V. Sridharan, Ex-General Secretary, P3 and Ex-Leader Staff Side, JCM (DC) delivered his speech. He addressed all the issues confronting to Postal employees, particularly P3 employees. He elaborately described the problems and difficulties being faced by P3 Employees due to CBS and CIS rollout. He stressed the need of united struggle taking in to account the all issues of Postal workers.
All Circle Secretaries, CHQ office bearers and Mahila Committee members presented their views on agenda items.
Circle Secretaries of Andhra Pradesh, Assam and North East did not attend the CWC.
At last the General Secretary summed up the discussion by giving brief reply on the querries raised by the CWC members. He assured all that the issues confronting the P3 employees will be dealt with full care and maximum efforts will be undertaken to settle those.

The most confronting issue was the problems and difficulties being faced by the employees in CBS roll out offices. All the CWC members asked for agitational programme to mitigate the suffering caused due to CBS and CIS. So the following programme of action was decided unanimously.

1st Phase -     Demonstration in front of all Divisional offices & submission of memorandum. CHQ will submit a memorandum to Secretary (P) & Minister.
2nd Phase -    Mass Dharna in front of all Divisional Offices.
3rd Phase -    Mass Dharna in front of all PMG and Chief PMG offices.
4th Phase -    One day Hunger fast in front of Dak Bhawan by All India Leader.
After this next phase of programme will be announced including strike.
Dates will be announced after discussion in the NFPE Federal Secretariat for envolving joint programme Memorandum will be prepared by CHQ/NFPE and circulated to all Demands: -
1.      Settlementof problems arisen due to rollout of CBS/CIS
2.      Pay Commission & Cadre related issues upgradation of pay scales.
3.      Implementation of cadre restructuring proposals before implementation of 7th CPC report.
4.      Filling up of vacant posts in all cadres of Department of posts.
5.      Implementation of Jodhpur Judgment and grant MACP to all the promotees.

The arrangements made by the reception committee were praised by each and every one. P3 CHQ extends all thanks and greetings to the reception committee under the leadership of Com. Jagdish Dhiman for making excellent arrangements in all respects. The CWC was concluded by the presidential address by Com. S. A. R. Mazgaonkar. At last meeting was ended with revolutionary slogans. 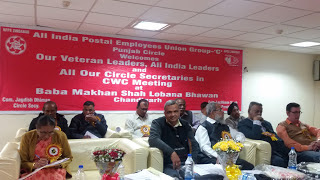 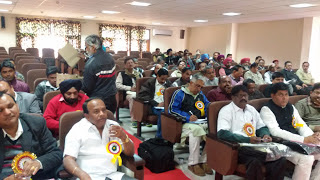 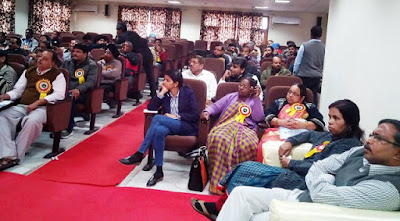 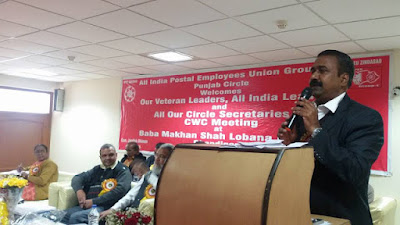 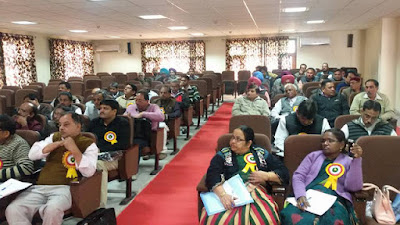 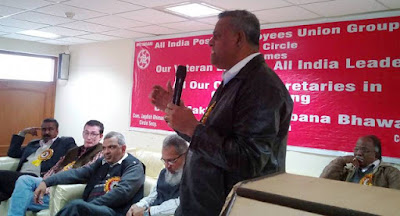