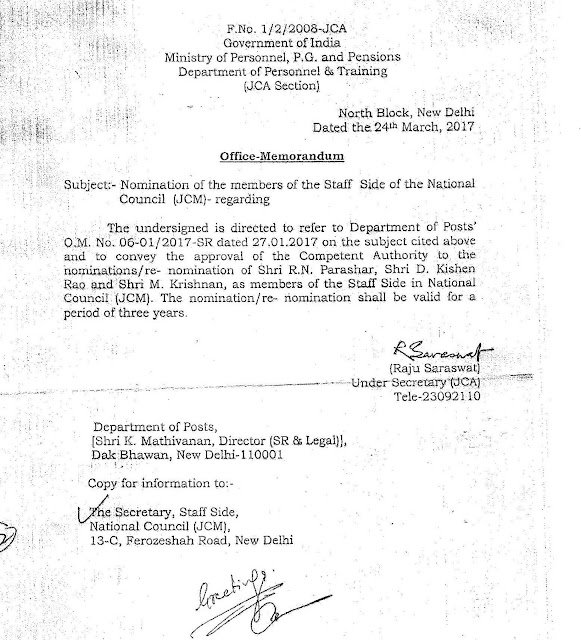 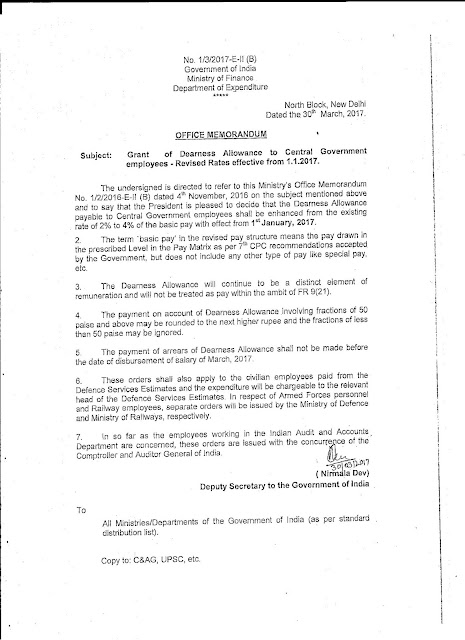 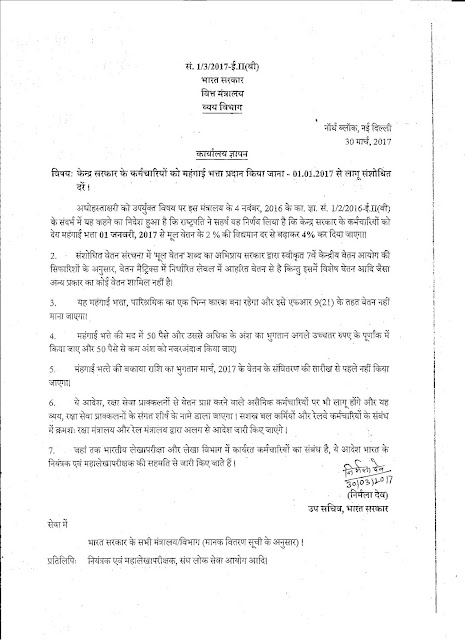 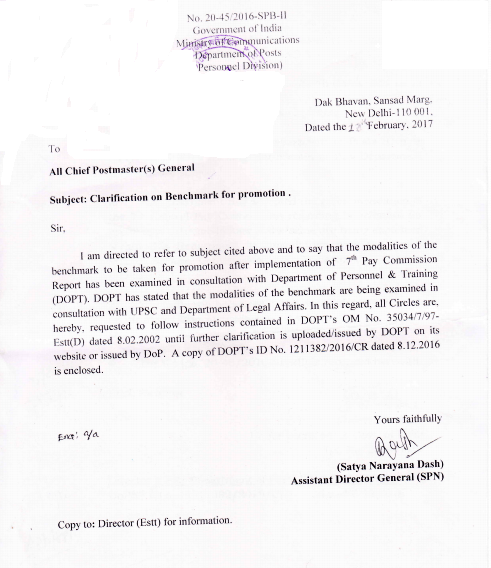 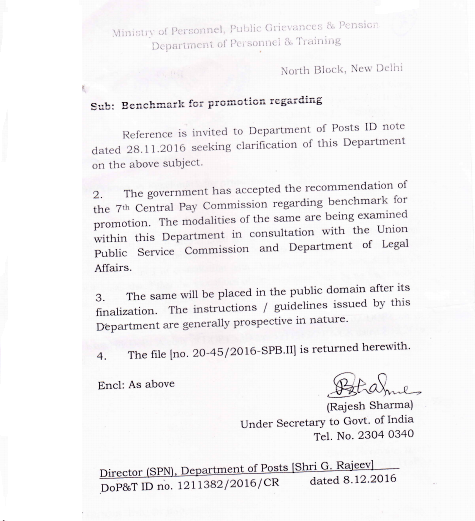 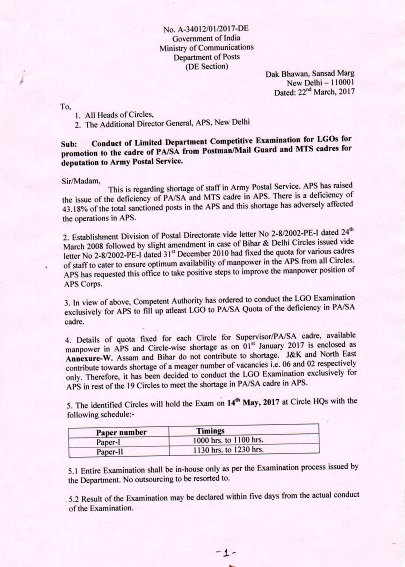 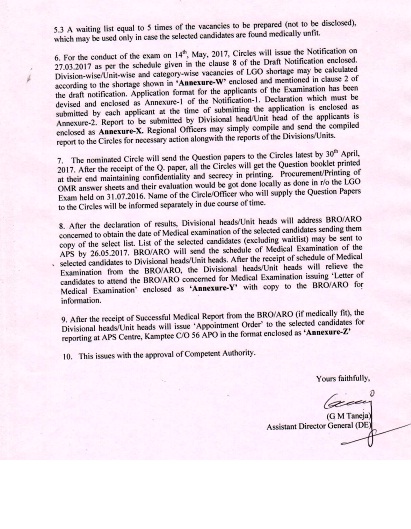 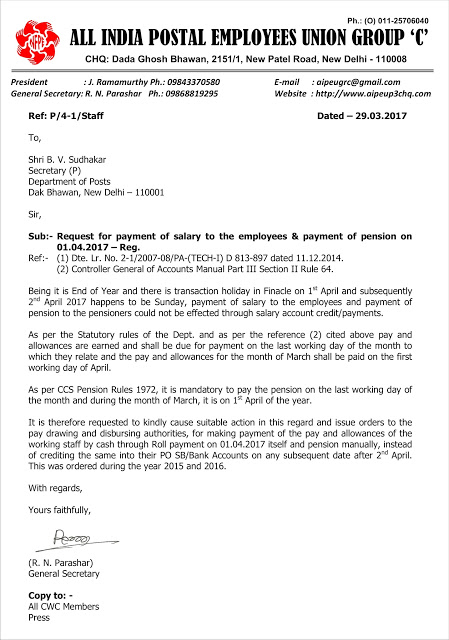 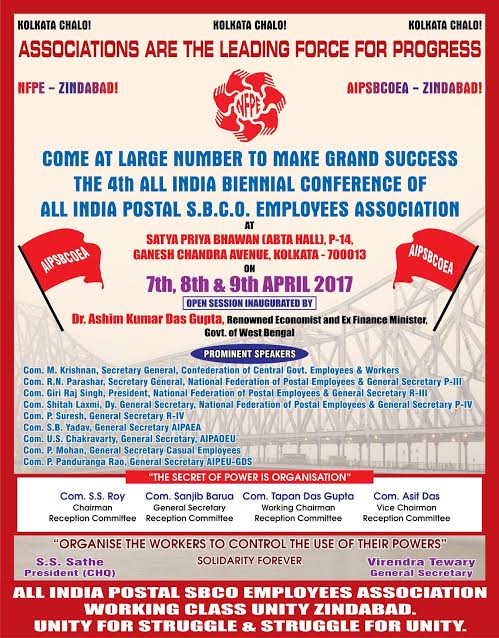 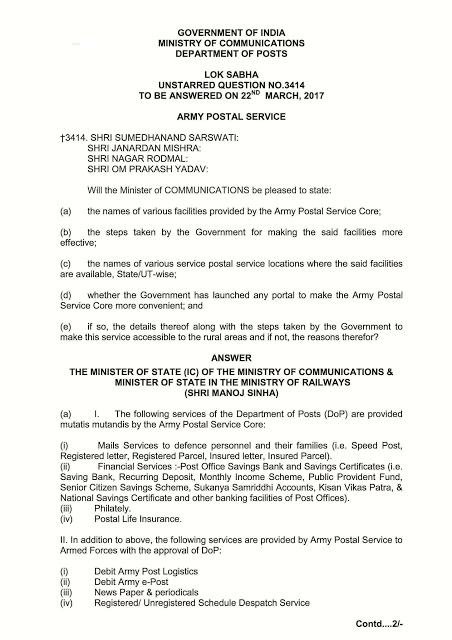 Posted by Unknown at 5:58 AM No comments:

AMENDMENT IN CCS (CLASSIFICATION, CONTROL AND APPEAL) RULES, 1965 REG. FIXING OF TIMELINES FOR FINALIZING DISCIPLINARY PROCEEDINGS-REG     TO VIEW PLEASE CLICK HERE.
**********
Amendment to the provisions of General Provident Fund (Central Service) Rules 1960- liberalization of provisions for drawal of advance from the Fund by the subscribers – regarding. (Click the link below to view)
(i) http://document.ccis.nic.in/WriteReadData/CircularPortal/D3/D03ppw/om-2march2.pdf 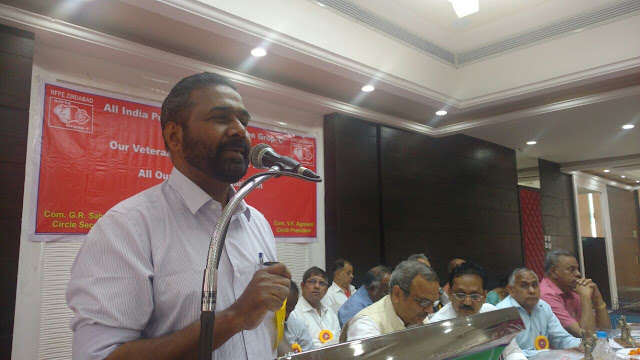 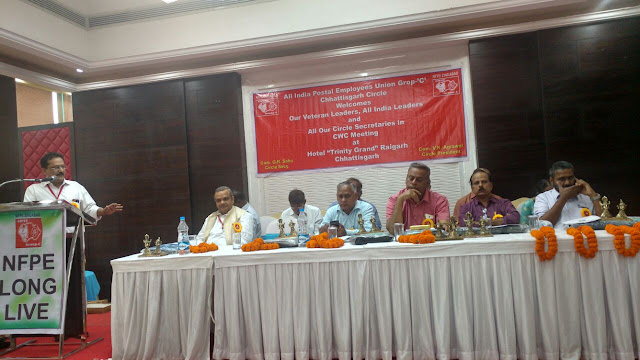 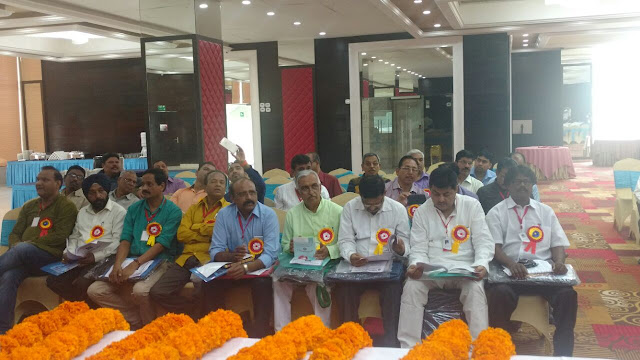 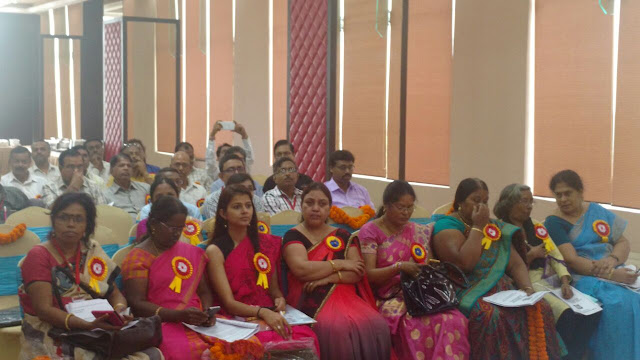 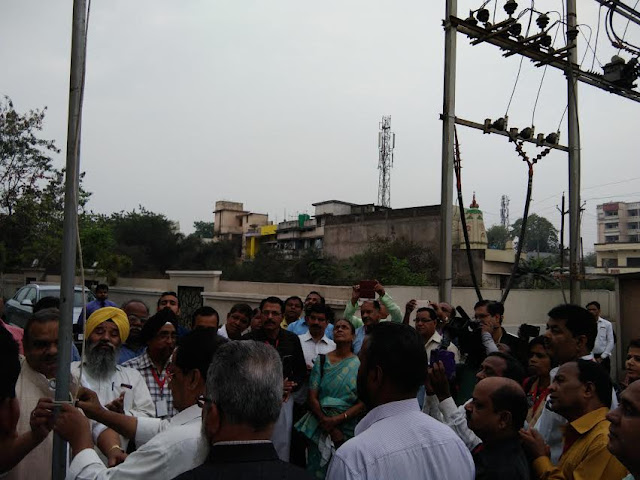 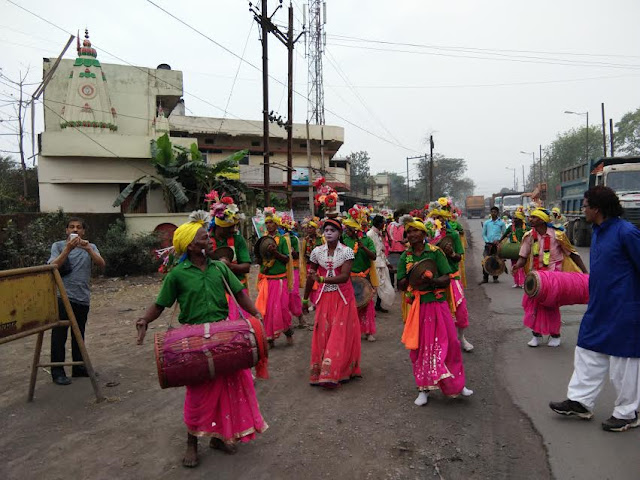 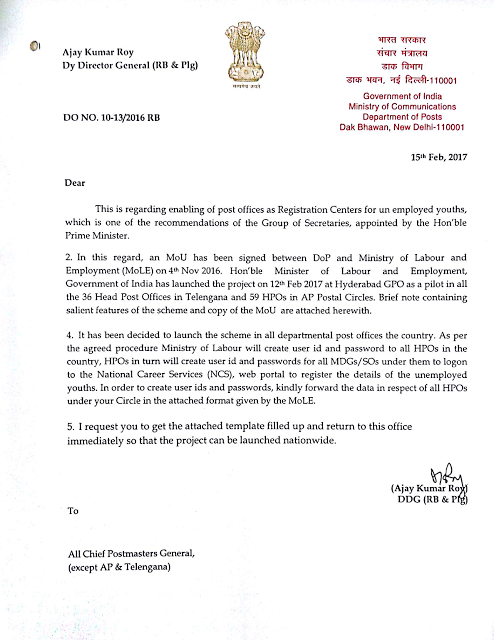 Cancellation of recognition to BPEU 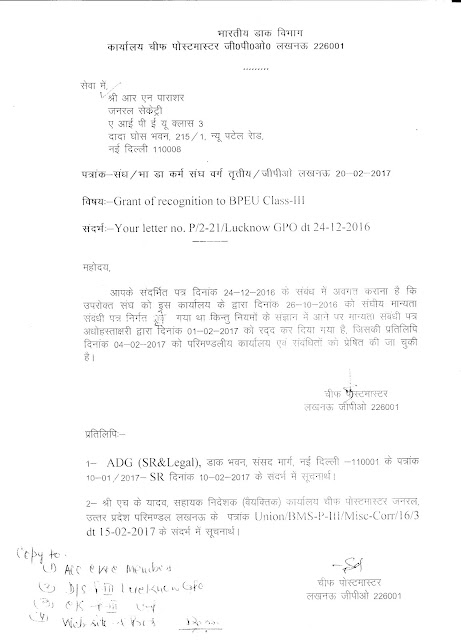 CLARIFICATION REGARDING TIMELY PAYMENT OF GPF FINAL PAYMENT TO THE RETIRING GOVERNMENT SERVANT – REGARDING (DOP ORDERS). (Click the link to view)
http://utilities.cept.gov.in/dop/pdfbind.ashx?id=2282
Posted by Unknown at 11:46 PM No comments: 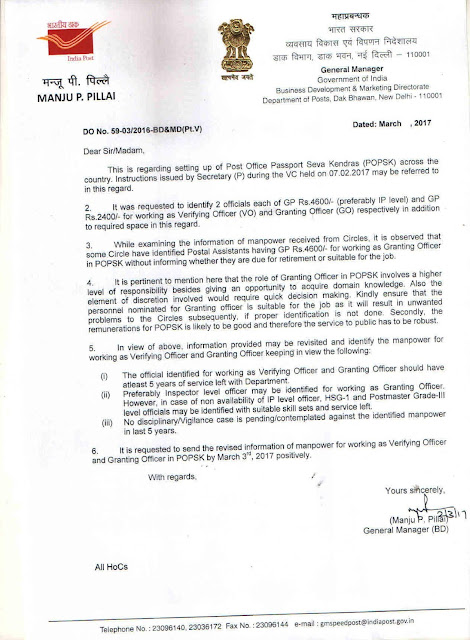 Govt of India has acknowledged the strike notice and charter of demands submitted by Confederation of Central Govt Employees & Workers and issued directions to all concerned Ministries to take appropriate action. Letters received from Govt is given below. 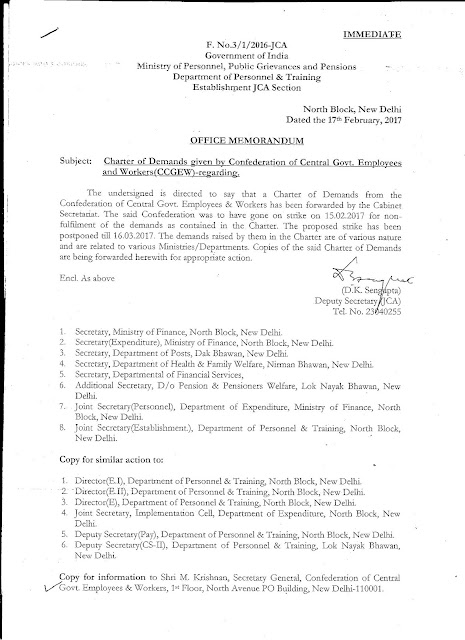 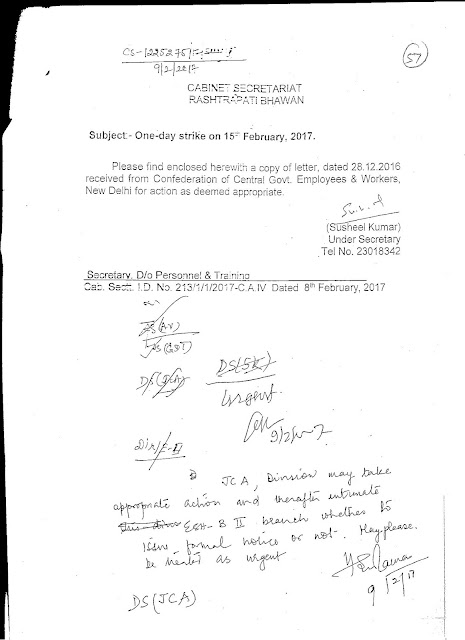 SETTING UP OF ANOMALY COMMITTEE TO SETTLE THE ANOMALIES ARISING OUT OF THE IMPLEMENTATION OF THE SEVENTH PAY COMMISSIONS RECOMMENDATIONS.

Subject: Setting up of Anomaly Committee to settle the anomalies arising out of the implementation of the Seventh Pay Commission’s recommendations.

The undersigned is directed to refer to DoPT’s OM of even number dated 16/8/2016 and to incorporate the following modification in the definition of anomaly:

“Where the Official Side and the Staff Side are of the opinion that the vertical and horizontal relativities have been disturbed as a result of the 7th Central Pay Commission to give rise to anomalous situation.”

2.         With the incorporation of the above para in the O.M., the definition of anomaly will read as follows:

(1)       Definition of Anomaly
Anomaly will include the following cases;

a)        Where the Official Side and the Staff Side are of the opinion that any recommendation is in contravention of the principle or the policy enunciated by the Sixth Central Pay Commission itself without the Commission assigning any reason;

b)        Where the maximum of the Level in the Pay Matrix corresponding to the applicable Grade Pay in the Pay Band under the pre-revised structure as notified vide CCS(RP Rules 2016, is less than the amount an employee is entitled to be fixed at, as per the formula for fixation of pay contained in the said Rules;

c)        Where the Official side and the Staff Side are of the opinion that the vertical and horizontal relativities have been disturbed as a result of the 7th Central Pay Commission to give rise to anomalous situation.

v Against the betrayal of Central Government employees and pensioners by Group of Ministers of NDA Government.
v  Demanding increase in minimum pay and fitment formula.

We know that all of you are in the midst of hectic preparation and campaign for making the 16thMarch Strike action a great success.  As has been explained in the article, which we have placed on our website, the NDA Government, led by BJP has exhibited the worst anti-employee attitude in the post independent  era of our country.  This Government has treated its own employees as its worst enemy. The decision taken by the Union Cabinet on 29th June, 2016 rejecting even the recommendations made by the high level committee chaired by the Cabinet Secretary was unprecedented. Even the setting up of various committees was nothing but an eye wash. Nothing will come out of that.  Even the NPS Committee on which the young comrades had pinned some hope of at least  getting a minimum guaranteed pension will produce nothing.  The discussions at the JCM fora has been converted into mostly monologues i.e. the official side simply listening and not reacting.  The Government, it appears, has made the Pension department to reject the one and only recommendation of the 7th CPC which was considered to be positive i.e. Option No.1 for pensioners on the specious ground that the same is not feasible to be implemented. The allowances committee has dilly dallied its deliberation and would now submit its report after the extended period of 6 months expires on 22.02.2017. Even if they make any positive recommendation, which is seldom expected, the NDA Government would not act upon it.  They have very successfully postponed the payment of the revised allowanced for 15 months.

In the face of such terrible onslaught, betrayal and chicanery, which no Government in the past has every indulged in,  it is surprising that some of our friends who has a predominant role in the movement of the Central Government employees has unfortunately chosen to wait and watch.  It appears that they have chosen to wait endlessly hurting the cause of the workers.

We have no hesitation to affirmatively state the obvious that we have chosen the right path, the path of struggles, which can only the choice of the working class against tyrannical attitude of the employer, howsoever, powerful they may be. We must realize that those who are  in the saddle of power today are not permanently posted there. We were witness to the abysmal downfall of persons who were arrogant personified.  It appears that the reasonableness, righteousness and patience we had exhibited have been taken as signs of cowardice. The undeniable fact is that those who fight, only can win. We, therefore, appeal to you to carry on with conviction and courage.

Eight months will be over on 6th March, 2017, when the Group of Ministers held out the assurance of revisiting the minimum wage and multiplication factor.  It is now crystal clear that that was an act of chicanery.  No committee was set up  and no discussions were held to seriously consider the issue.  We, therefore, appeal to all of you to ensure that the day, i.e. 6thMarch, 2017 is observed as a day of betrayal and all our members are requested to wear a Black badge with the following words inscribed on it in bold letters and conduct demonstrations in front of all Central Government offices.

HONOUR THE COMMITMENT MADE ON
30th June & 6th JULY, 2016
REVISE THE MINIMUM WAGE AND
MULTIPLICATION FACTOR

6TH March 2017 must be yet another occasion to mobilize our members to ensure their participation in the 16th March, 2017 strike action and ultimately win all the demands in the charter.

We fight to win and we shall win.
With greetings,
Yours fraternally,