Instead of the government directly paying the medical bills of CGHS beneficiaries, the new scheme will be implemented through insurance companies registered with the Insurance Regulatory and Development Authority and selected through bidding.

Currently, under CGHS, government employees pay Rs 6,000 annually as fixed medical allowance (FMA). The new FMA for beneficiaries is yet to be calculated. While the government’s actual financial commitment will depend on bids and the new FMA, the ministry is working on a presumptive figure of Rs 14,000 per family, which works out to approximately Rs 1,000 crore annually.

The scheme will cover medical expenses up to Rs 5 lakh per family per year. Beyond that, the insurer will have to get clearance from the nodal agency on a case to case basis. An additional sum insured of Rs 10 crore in each of the four zones will be provided by the insurer as buffer for such cases. The CGHS in its present form does not have any annual cap, but each procedure has a prescribed maximum limit for reimbursement. While a note for the Expenditure Finance Committee (EFC) was circulated last year, a fresh proposal incorporating inputs from various departments including the DoPT, erstwhile Planning Commission and Ministry of Statistics and Programme Implementation has been sent to the finance pision of the health ministry.

While existing employees can choose between CGHS and CGEPHIS, the new scheme will be made compulsory for new employees.

Sources in the health ministry said the proposal dates back to 2011, when the committee of secretaries gave its in-principle approval.  The proposal was revived after the NDA government took charge. Former Health Minister Dr Harsh Vardhan, however, was opposed to the idea. According to sources, Vardhan was of the opinion that the change would actually mean a higher burden on the exchequer. The annual CGHS bill has increased in the past few years, rising from Rs 987.75 crore in 2008-09 to Rs 1755.62 crore in 2013-14. The average expenditure per beneficiary adds up to Rs 4,787 (which means about Rs 23,000 for a family of five) — Rs 11,955 for pensioners and Rs 2,096 for serving employees.

Under CGEPHIS, the OPD needs will be met by the FMA. While the CGHS covers only 25 cities, the new scheme will be pan-India. This would automatically increase the financial commitment. All diseases, including pre-existing ones, will be covered, and in case of transplants, the expenses incurred for the donor or processing of cadaver organ will also be covered. Interestingly, the Rashtriya Swasthya Bima Yojana, which was run by the labour ministry so far, will be under the health ministry from April 1, as it moves from an insurance-based scheme to a trust-based scheme.
Source: The Indian Express
Posted by Unknown at 8:12 AM No comments:

Email ThisBlogThis!Share to TwitterShare to FacebookShare to Pinterest
TRAVEL BY PREMIUM TRAINS ON LTC- CLARIFICATION REG. (Click the link below for details)
http://ccis.nic.in/WriteReadData/CircularPortal/D2/D02est

The Commission, headed by its Chairman, Justice Shri A. K. Mathur, proposes to visit Andaman & Nicobar Islands from 4th to 7th February, 2015.

The Commission would like to invite various entities/associations/federations representing any/all categories of employees covered by the terms of reference of the Commission to present their views.

Your request for a meeting with the Commission may be sent through e-mail to the Secretary, 7th Central Pay Commission at secy-7cpc@nic.in. The memorandum already submitted by the requesting entity may also be sent as an attachment with this e-mail.

Posted by Unknown at 9:35 AM No comments: 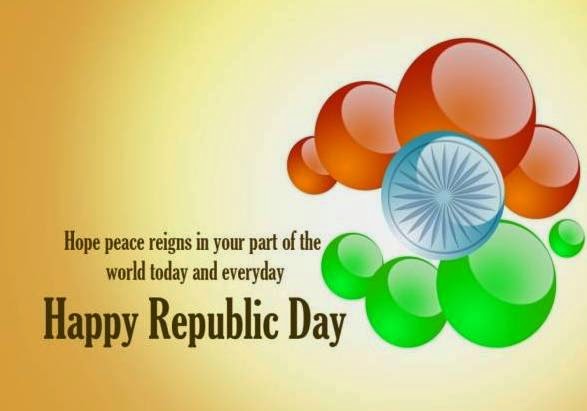 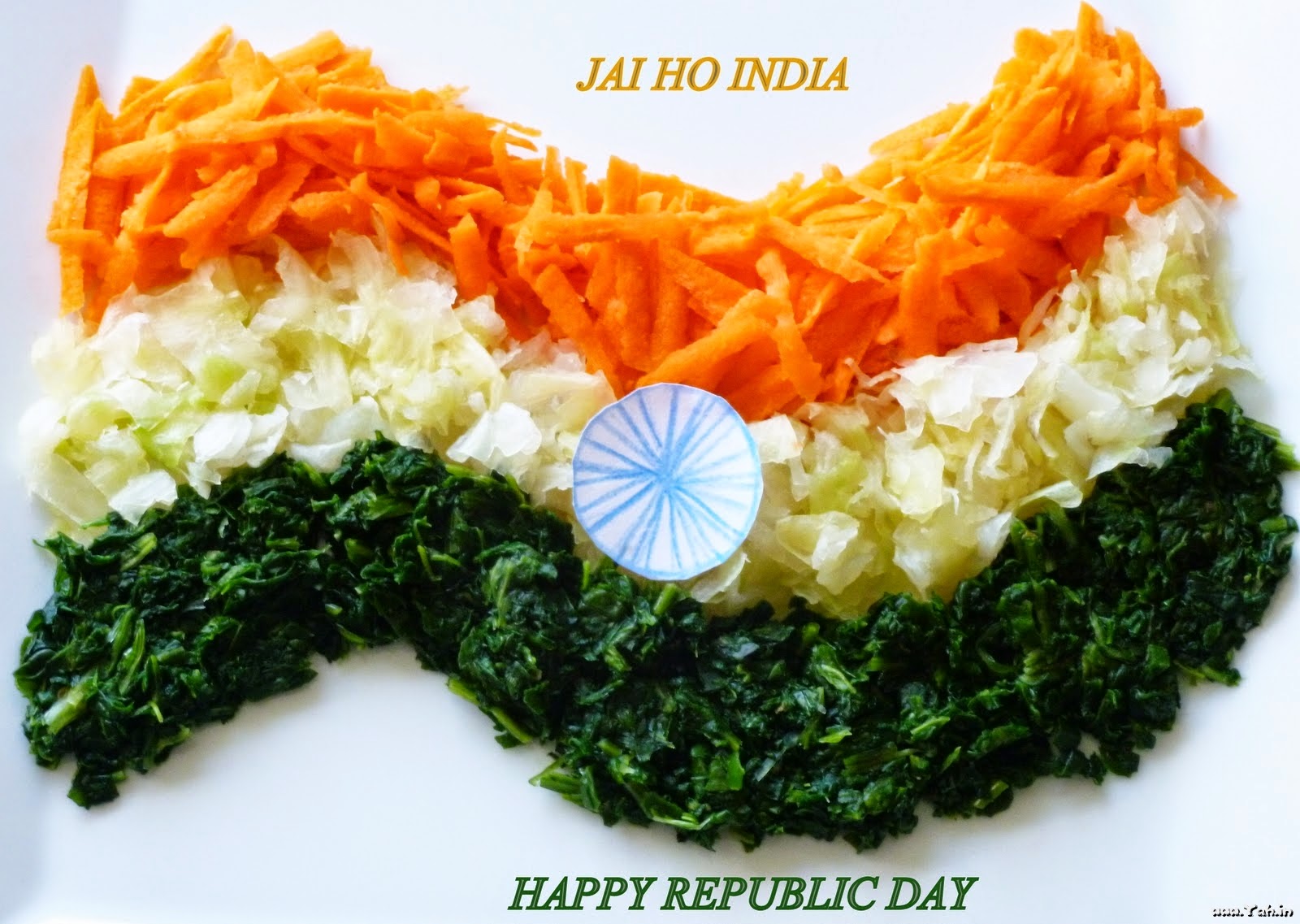 Posted by Unknown at 9:29 AM No comments:

Email ThisBlogThis!Share to TwitterShare to FacebookShare to Pinterest
INFORMATION RELATING TO ASSETS AND LIABILITIES UNDER LOKPAL AND LOKAYUKTA AND FILING OF AIPR UNDER CCS (CONDUCT), RULES - CIRCULATION OF INSTRUCTION - REGARDING(Click the link below for details)
http://www.indiapost.gov.in/DOP/Pdf/Circulars/Lokpal_AIPR_Pub_upload.pdf

THIS IS THE MUCH AWAITED DIRECTORATE ORDER. ALL OUR SECRETARIES ARE REQUESTED TO ENSURE EARLY PAYMENT INCLUDING ARREARS TO THE CL / PT WORKERS 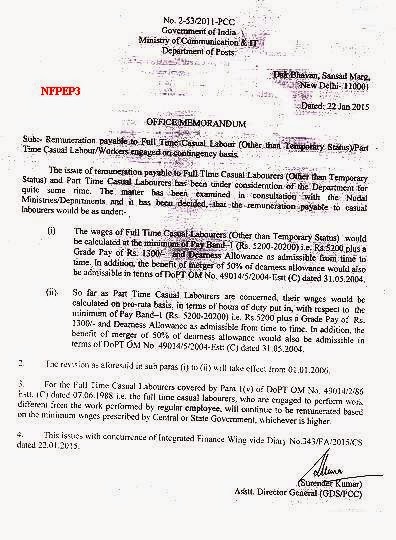 3.         For the Full Time Casual Labouers covered by Para 1(v) of DoPT O.M. No. 49014/2/86 Estt.(C) dated 07.06.1988 i.e. the full time casual labourers, who are engaged to perform work different from the work performed by regular employees, will continue to be remunerated  based on the minimum wages prescribed by Central or State Government, whichever is higher.

NFPE
3rd ALL INDIA CONFEREENCE OF
SBCO EMPLOYEES ASSOCIATION (AIPSBCOEA)
(Affiliated to National Federation of Postal Employees)
RECEPTION  COMMITTEE  FORMED
The 3rd All India conference of SBCO employees association affiliated to NFPE will be held at Thekkady in Idukki division (Kerala) from 14.03.2015 to 15.03.2015. The Reception Committee of the All India conference was formed on 18.01.2015 in the meeting held at Thekkady. The meeting was inaugurated by Com. M.Krishnan Secretary General Confederation of Central Government Employees and Workers and Ex.Secretary General NFPE. Com. P.V.Rajendran Circle Secretary R III & State Convenor, NFPE, Com.M.S.Sabu, Circle Secretary AIPEU GDS (NFPE) and Girish Shekharan, Circle Secretary SBCO Employees Asociation Kerala Circle were present in the meeting.

Reception Committee.
Posted by Unknown at 9:24 AM No comments:

Posted by Unknown at 9:06 AM No comments:

The 2nd All India Conference of AIPEU-GDS (NFPE) will be held at Shimla (Himachal Pradesh) on 19th & 20th September 2015. All Circle Unions are requested to complete formation of Divisional Unions in all circles and send Delegates to the conference. Please remit Quota to GDS CHQ also.

It is hereby notified that the extended National Secretariat meeting of the Confederation of Central Govt. Employees & Workers will be held at Confederation Headquarters (1st Floor, North Avenue Post Office building) New Delhi-110 001 on 17th February, 2015, Tuesday.  The meeting shall commence at 10.30 AM on 17-02-2015 and continue till close.  All National Secretariat members (CHQ Office Bearers) and State C-O-C General Secretaries are requested to attend the meeting without fail.  The following shall be the agenda of the meeting.
Agenda:
1.      Organisational Review
2.      All India Trade Union Workshop held at Bangalore - Review
3.      Implementation of decision of the National Joint Council of Action (National Council JCM Staff side)
a)      Review of the 11th December National Convention.
b)      Implementation of the decisions of NJCA dated 11-12-2014 & 11-01-2015.
c)      Fixing of quota to all affiliates of Confederation and COCs for participation in the 28th April 2015 Parliament March of Central Govt. Employees.
4.      Financial Review and remittance of arrears of quota by affiliates.
5.      All India Workshop of Women Employees of Confederation - Fixing venue and dates.
6.      Any other item with permission of the chair.
Yours fraternally,
M. Krishnan,
Secretary General. 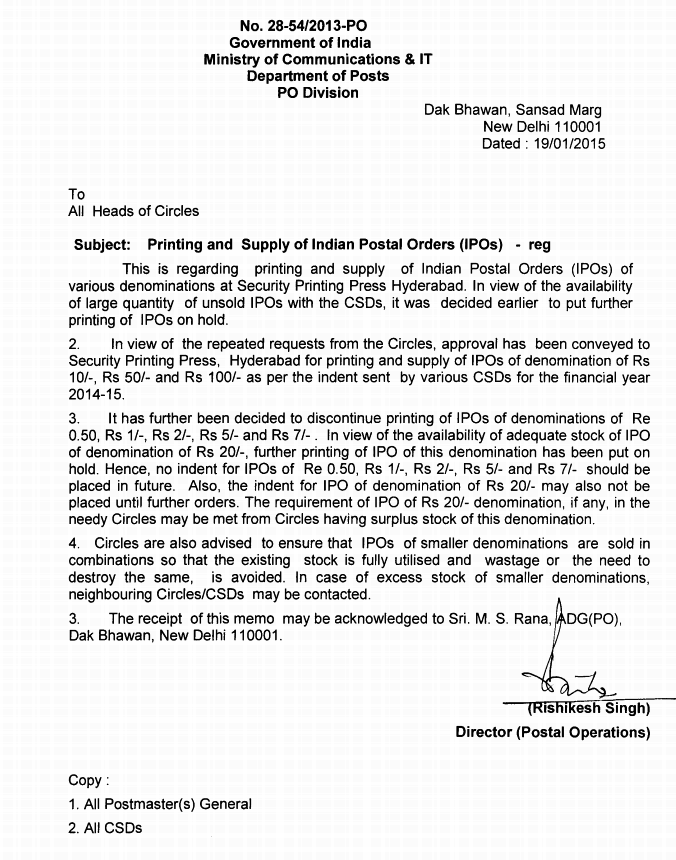 Posted by Unknown at 9:03 AM No comments:

Immovable Property Return for the year 2014 (as on 31.12.2014) - Submission through cscms.nic.in- regarding.(Click the link below for details)
http://ccis.nic.in/WriteReadData/CircularPortal/D2/D02csd/16115.pdf

26th meeting of the Standing Committee of Voluntary Agencies (SCOVA)under the Chairmanship of Hon'ble MOS (PP) to be held on 03rd  February, 2015 at 11.00 AM in Committee Room-A, Vigyan Bhawan Annexe, New Delhi – Reg (Click the link below for details)
http://ccis.nic.in/WriteReadData/CircularPortal/D3/D03ppw/SCOVA_150115.pdf

Declaration of Assets and Liabilities under the Lokpal and Lokayuktas Act, 2013 - Clarification on filing of property returns in accordance with existing service rules for different categories of public servants – Reg  Click Here.

REVISION OF RATES OF HONORARIUM TO INQUIRY OFFICERS (SERVING PART TIME/RETIRED) AND PRESENTING OFFICERS (Click the link below for details)
http://www.indiapost.gov.in/DOP/Pdf/Circulars/Revision_Rate_Hon_Inq_Off_1826_Pub_Upload.PDF
Posted by Unknown at 10:11 AM No comments: