CONFEDERATION OF CENTRAL GOVT. EMPLOYEES & WORKERS
1st Floor, North Avenue PO Building, New Delhi – 110001
Website: www.confederationhq.blogspot.com
Email: Confederationhq@yahoo.co.in
Ref: CIRCULAR NO. 9                                                                                          Dated - 13.11.2013
To
All CHQ Officers
All General Secretaries C-O-Cs
All Chief Executives of Affiliated Unions
ENSURE MASS SCALE PARTICIPATION IN THE
2013 DECEMBER 12TH PARLIAMENT MARCH
Dear Comrades,
Intensive campaign and preparations are in full swing all over the country for making the 2013 December 12th Parliament March organized by all the Central Trade Unions an unforgettable event in the Trade Union history of our country. The rally is organized as a continuation of the united struggle of the working class of India against the neo-liberal policies of the Central Government.
Confederation of Central Government Employees and workers, being a class-oriented militant organisation of the Central Government Employees, has always been in the fore-front of all the struggles conducted against the neo-liberal globalization policies and had participated in all the strike actions including the 2013 February 20, 21st 48 hours strike. The 12th December 2013 mobilisation at Delhi must have to reflect the spirit and tempo of preparation for a bigger struggle in the days to come.
The National Secretariat of the Confederation calls upon the entirety of the Central Government employees to ensure massive participation in the 12th December 2013 Parliament March.
The C-O-Cs and affiliated organisations of Delhi, Himachal Pradesh, Haryana, Punjab, Rajasthan, Uttar Pradesh, Uttarakhad and Bihar are requested to make all out efforts to mobilize maximum Central Government employees in the Parliament March.
GDS PARLIAMENT MARCH ON 11.12.2013
All India Postal Employees Union – GDS (NFPE) and affiliate of Confederation will be organizing a massive Parliament March of Gramin Dak Sevaks on 11th December 2013 demanding inclusion of GDS under the purview of 7th CPC, Regularisation, Civil Servant Status, and other benefits at par with Departmental employees. All affiliates of the Confederation are also requested to ensure maximum support and cooperation for making the GDS Parliament March a grand success.
ALL INDIA TRADE UNION EDUCATION CAMP, MUMBAI & ALL INDIA WOMEN’S CONVENTION, NEW DELHI
All arrangements have been made by the Reception Committees of Mumbai and Delhi (COCs) for the successful conducting of the Trade Union Camp and Women’s Convention. Full details are available in the Confederation Website (www.confederationhq.blogspot.com) Com. Tapan Sen, MP, will inaugurate the Mumbai camp and Prof. Utsa Patnaik will inaugurate the New Delhi Women’s Convention.
NATIONAL SECRETARIAT MEETING ON 28.11.2013 AT NEW DELHI
Confederation National Secretariat meeting will be held at New Delhi on 28.11.2013 at 4 PM. 7th CPC related issues and the future course of action will be decided in the Secretariat meeting. all office Bearers are requested to attend the meeting WITHOUT FAIL.
INTERNATIONAL CONFERENCE OF “SOUTHERN INITIATIVE ON GLOBALISATION AND TRADE UNION RIGHTS” (SIGTUR) AT PERTH (AUSTRALIA) FROM 2ND TO 6TH DECEMBER 2013
10th Congress of SIGTUR hoisted by the Australian Council of Trade Unions (ACTU) will held at “Point Walter Sport and Recreation Centre in Perth, Western Australia from 2nd to 6th December 2013.
Com. M. Krishnan, Secretary General, Confederation will be attending the Congress as an official Delegate.
STREAMLINE THE FUNCTIONING OF C-O-CS AND FORM STATE/DISTRICT COMMITTEES IN ALL STATES AND DISTRICTS:
As already mentioned in the previous circulars, without streamlining the functioning of State/District C-O-Cs to ensure democratic functioning at all levels, we cannot make Confederation a vibrant organisation. All affiliated organisations and C-O-Cs are once again requested to take initiative to form State and District Committees of Confederation in a phased manner and also to convene Conferences and Committees in a democratic manner.
UPDATING THE MAILING LIST OF CONFEDERATION CHQ:
The updated mailing list is exhibited in the Confederation Website. Please check it and furnish the names and address of the organizations and C-O-Cs, of which are missing in the mailing list. Correct Postal Address with pincode and mobile number (Plus e-mail ID) of omitted organizations and         C-O-Cs may be furnished before 15.12.2013 either by e-mail or by post.
REMIT QUOTA DUES. HELP CONFEDERATION CHQ TO FUNCTION BETTER:
As you are aware for effective functioning of a vibrant organisation like Confederation, sound financial position is a must. At present the financial position of Confederation CHQ is not at all satisfactory. It is regretted to note that most of the affiliated organistaions and C-O-Cs, have not remitted their quota after the Kolkata National Conference held in May 2013. All Affiliated organistaion are requested to remit their quota to confederation CHQ (Rupee one per member per year) in the following address before 31.12.2013.
ADDRESS FOR REMITTANCE OF QUOTA
Com. Vrigu Bhattacharjee
Financial Secretary
Confederation of Central Government Employees & Workers (CHQ)
1st Floor, North Avenue Post office Building, North Avenue
New Delhi – 110001
PUBLISHING MONTHLY JOURNAL OF CONFEDERATION:
Decision regarding publishing of a monthly journal of Confederation CHQ will be taken in the National Secretariat meeting to be held on 28.11.2013. Improvement in the financial position is a prerequisite for publication of Journal.
WITH CHRISTMAS & NEW YEAR GREETINGS
Comradely yours,
(M. Krishnan)
Secretary General
Mob: 09447068125
Email: mkrishnan6854@gmail.com

Links to this post
CONFEDERATION’S DEMAND FOR 50% MERGER OF DA W.E.F. 01.01.2011
NFIR ALSO DEMANDS MERGER OF 50% DA WITH EFFECT FROM 01.01.2011
NFIR
National Federation of Indian Railwaymen
3, CHELMSFORD ROAD, NEW DELHI- 110055
Affiliated to:
Indian National Trade Union Congress (INTUC)
International Transport Workers’ Federation (ITF)
No. 1/5 (A)
Dated: 27.09.2013
Hon’ble Prime Minister of India,
Raisina Hill,
South Block
New Delhi.
Respected Sir,
Sub:-  Merger of Dearness Allowance with the Pay of the Central Government Employees - reg.
While thanking you for the decision for appointment of 7th Central Pay Commission, we request you to kindly appreciate that the Dearness Allowance paid to the Central Government employees had crossed 50% of pay as on 01.01.2011. This portion of the Dearness Allowance needs to be merged with the Pay for all purposes as was done in the year 2004.
2. According to the figures available, the Central Government employees will get at least 9% increase in the Dearness Allowance w.e.f. 01/01/2014 thus the DA may be almost 100% of pay.
NF1R, therefore, requests you to kindly see that Government takes decision for merger of 50% DA with pay for all purposes with effect from January 1, 2011.
Yours faithfully,
sd/-
(M. Raghavaiah)
General Secretary

Holding of meeting on cadre Restructuring of Group 'C' Employees 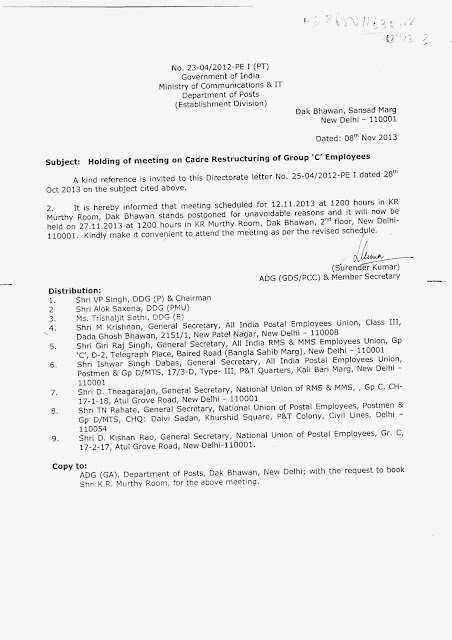