The Act is applicable to all Women who are employed in any capacity directly or through any agency i.e either on Contractual or as Consultant. 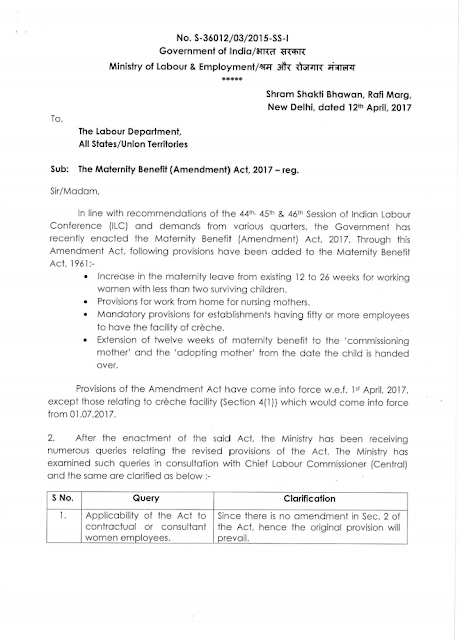 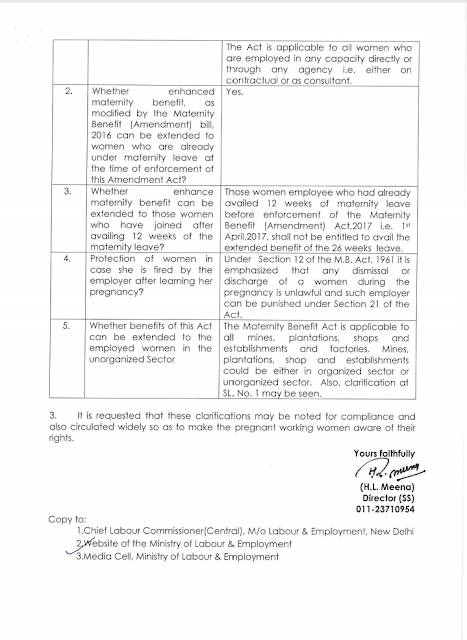 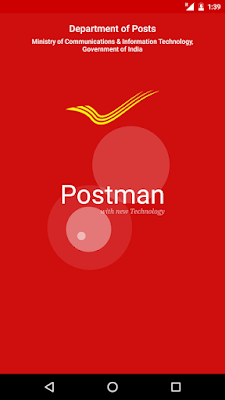 MAJOR FACILITY IS BELOW-

1. It's compulsory for postman to carry Mobile in field / door step of the customer.

2. All type articles will be delivered by the Postman through postman Application.

.4. After delivery of articles data uploaded on website at the same time/ immediately.

5. In morning article data collect through data cable from computer and same give return in evening

6. Mobile should be handed over to Treasurer in Treasury in evening

7. Games, other unauthorized applications and data's are prohibited.

8. At initial Stage Postman delivered article in both delivery slip and Mobile application, they will move only with application in later date if they specialist in Postman Mobile Application 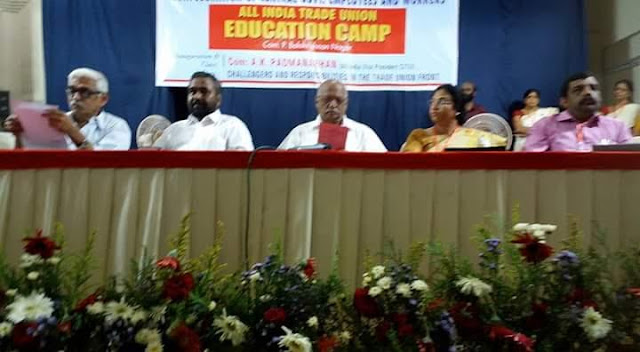 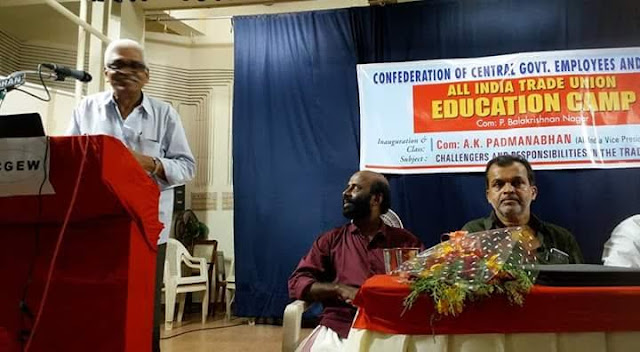 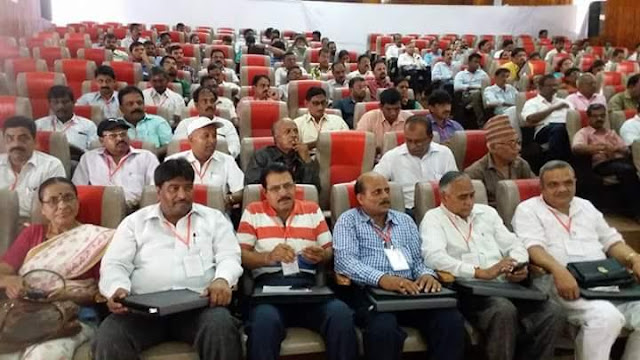 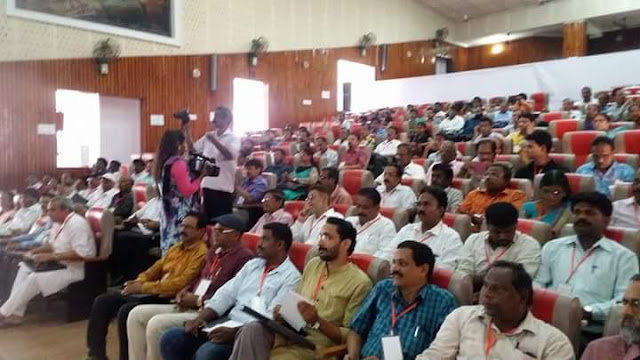 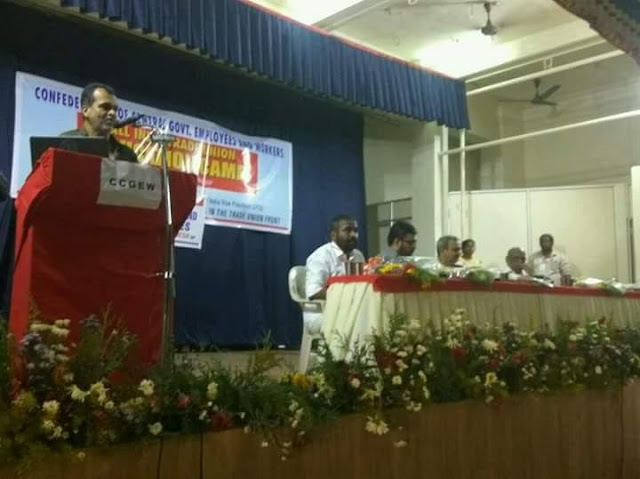 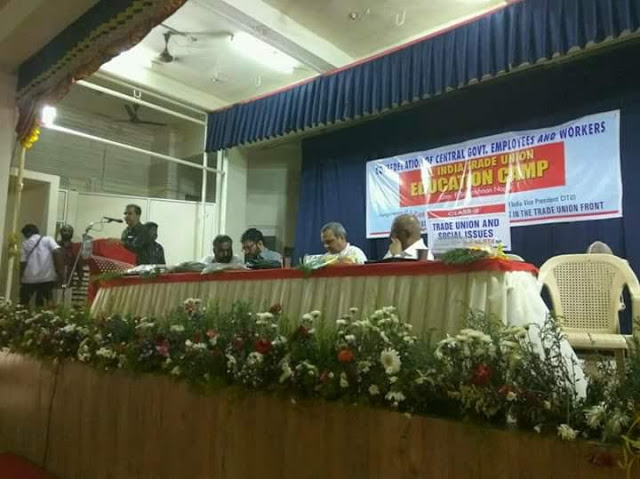 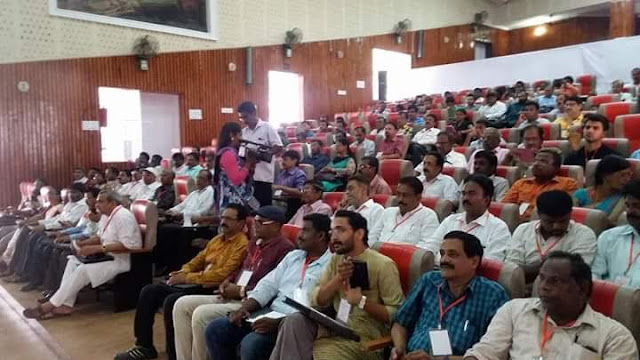 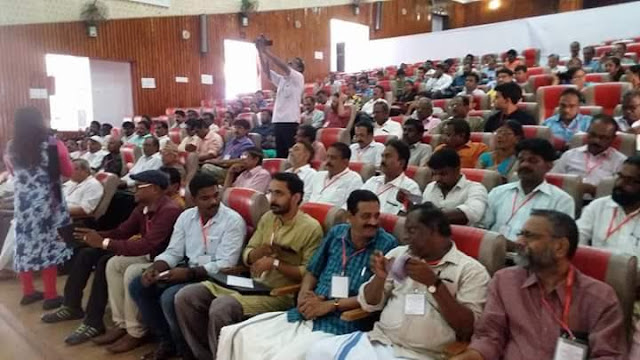 Com.M.Krishnan, Secretary General, Confederation spoken elaborately on the organizational issues of AIPEU-GDS and the analysis of recommendations of the GDS Committee.
The CWC meeting concluded with the unanimous resolutions on demanding the Department & Govt to implement all the positive recommendations of Shri Kamalesh Chandra Committee Report at the earliest and immediate issuance of notification to conduct membership verification in GDS cadre.

The arrangements made by the Reception Committee for holding the CWC meeting and for the participants, invitees deserves all appreciation. CHQ conveyed heartfelt thanks to the comrades of Kerala for their support and cooperation to AIPEU-GDS. 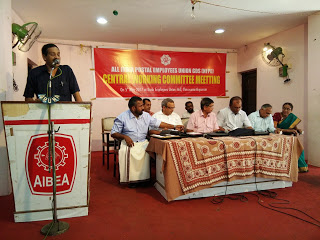 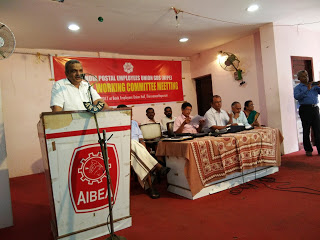 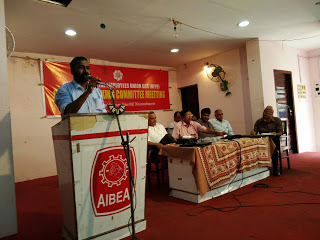 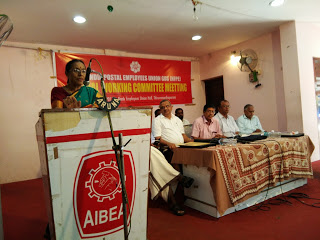 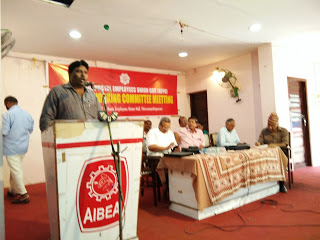 PENSIONER’S PARITY
We are getting many phone calls and messages from Central Government Pensioners and employees regarding the Cabinet decision on 03.05.2017. Government has approved the recommendations of the Committee headed by Secretary (Pension) constituted by it as per the cabinet decision on 29.06.2016. The full details of the cabinet decision will be known only after issuing orders by Pension Ministry. The Pension Committee has told the JCM Staff Side that instead of Option-I parity, recommended by 7th CPC, it is considering 5th CPC recommended parity. It is presumed that the decision of the Cabinet may be to extend 5th CPC recommended parity to pre-2016 pensioners as recommended by Pension Committee. We are waiting for detailed orders to confirm.
Regarding option-2 parity recommended by 7th CPC, the Pension Committee and Cabinet has rejected the recommendations as NOT FEASIBLE, eventhough JCM Staff side has tried its best to convince the Pension Committee that it is Feasible. The intention behind the Cabinet decision dated 29.06.2017 to constitute a committee to examine the feasibility of option-I recommended by 7th CPC was to deny the Option-I parity which is more beneficial to pre-2006 pensioners than the 5th CPC Parity. Of course 5th CPC parity is also beneficial but option-I parity of 7th CPC is more beneficial to many employees.
Confederation of Central Government Employees and workers shall continue its struggle for Option-I parity alongwith the National Coordination Committee of Pensioners Association (NCCPA).
The details of the 3rd May Cabinet decision will be published as and when orders are issued by Government. Please wait for detailed orders before coming to any conclusion.
(M. Krishnan)
Secretary General
Mob:  & WhatsApp – 09447068125
Email: mkrishnan6854@gmail.com

PAY FIXATION OF RE-EMPLOYEED EX-SERVICEMEN
(PERSONNEL BELOW OFFICERS RANK-PBOR)
DOP&T has issued orders on 01.05.2017, regarding applicability of Revised Pay Rules 2016 to persons re-employed in Government Service after retirement including those re-employed Ex-Servicemen. Confederation has been demanding fixation of pay of re-employed Ex-Servicemen (Personnel Below officers Rank) by protecting their last pay drawn in Military service. We have written a detailed letter to Shri Jitendra Singh, Minister of State (Department of Personnel) on 28.09.2016 giving full justification of pay protection, which is published in the Confederation Website – www.confederationhq.blogspot.com on 29.09.2016. We have also discussed the case as an agenda item in the Standing Committee meeting of National Council JCM on 25.10.2016 and Govt’s reply is published in the website on 3rd December 2017 under the heading Minutes of the Standing Committee Meeting. After issuing of orders on 01.05.2017, we have again raised the issue in the Standing Committee meeting of National Council JCM on 3rd May 2017 which was presided by Secretary, Department of Personnel. DOP&T took a firm stand that “PROTECTION OF LAST PAY DRAWN CANNOT BE EXTENDED TO RE-EMPLOYED EX-SERVICEMEN (PBOR) AS THEIR ENTIRE MILITARY PENSION AND PENSIONARY BENEFITS ARE IGNORED FOR PAY FIXATION IN THE RE-EMPLOYED POST”. In cases where the entire pension and pensionary benefits are not ignored for pay fixation (as in the case of officers) the initial basic pay on re-employment shall be fixed at the same stage as the last basic pay drawn before retirement. Inspite of our best efforts, there is no chance in changing the stand taken by DOP&T. we have to explore other means for getting justice to the re-employed Ex-Servicemen (PBOR).
(M. Krishnan)
Secretary General
Mob & WhatsApp – 09447068125
Email: mkrishnan6854@gmail.com

REVISION/AMENDMENT IN RECRUITMENT RULES FOR THE POST OF POSTAL SERVICE GROUP 'B' (Click the link below to view)
http://utilities.cept.gov.in/dop/pdfbind.ashx?id=2360

The protest of the staffside regarding abnormal delay in implementation of revised allowances from 01.01.2016 , increase in minimum pay and fitment formula , Option -1  parity of Pensioners , revision of pension and grant of dearness relief to autonomous body penioners etc was conveyed to Secretary , Department of Personnel who chaired the meeting. The proposed move to close down DGS&D was also raised.

To discuss the new items another meeting will be held shortly.

On behalf of Confederation Coms: K.K.N.Kutty , M.Krishnan and M.S.Raja attended. Cabinet has approved the parity in pension  recommended by the Pension Committee constituted by Govt w.e.f.01.01.2016. (whether it is 5th CPC recommended parity can be confirmed only after seeing the orders).

It is confirmed that Option -1 recommended by 7th CPC  is rejected.

The Union Cabinet chaired by the Prime Minister Shri Narendra Modi approved important proposals relating to modifications in the 7th CPC (Central Pay Commission) recommendations on pay and pensionary benefits in the course of their implementation. Earlier, in June, 2016, the Cabinet had approved implementation of the recommendations with an additional financial outgo of Rs 84,933 crore for 2016-17 (including arrears for 2 months of 2015-16).

The benefit of the proposed modifications will be available with effect from 1st January, 2016, i.e., the date of implementation of 7th CPC recommendations. With the increase approved by the Cabinet, the annual pension bill alone of the Central Government is likely to be Rs.1,76,071 crore.  Some of the important decisions of the Cabinet are mentioned below:

While approving the implementation of the 7th CPC recommendations on 29th June, 2016, the Cabinet had approved the changed method of pension revision recommended by the 7th CPC for pre-2016 pensioners, comprising of two alternative formulations, subject to the feasibility of the first formulation which was to be examined by the Committee.

In terms of the Cabinet decision, pensions of pre-2016 pensioners were revised as per the second formulation multiplying existing pension by a fitment factor of 2.57, though the pensioners were to be given the option of choosing the more beneficial of the two formulations as per the 7th CPC recommendations.

In order to provide the more beneficial option to the pensioners, Cabinet has accepted the recommendations of the Committee, which has suggested revision of pension based on information contained in the Pension Payment Order (PPO) issued to every pensioner.  The revised procedure of fixation of notional pay is more scientific, rational and implementable in all the cases.  The Committee reached its findings based on an analysis of hundreds of live pension cases.  The modified formulation will be beneficial to more pensioners than the first formulation recommended by the 7th CPC, which was not found to be feasible to implement on account of non-availability of records in a large number of cases and was also found to be prone to several anomalies.

The decision which will benefit existing and future Defence pensioners would entail an additional expenditure of approximately Rs. 130 crore per annum.