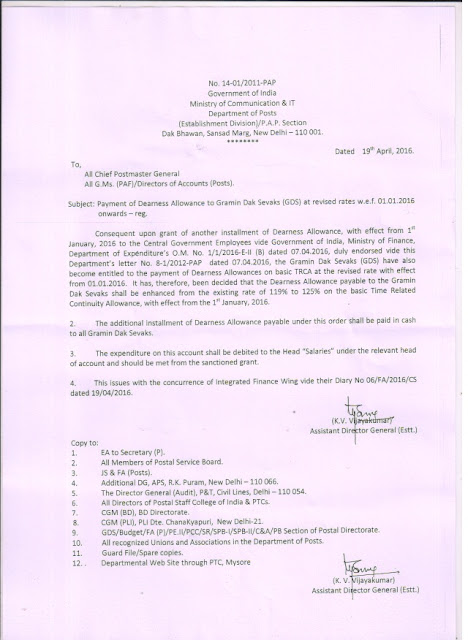 ON SECOND THOUGHT, DOPT DOES NOT WANT TO
SCRAP PENSIONS ACT.

New Delhi: The Department of Personnel and Training (DoPT) has decided against scrapping a 145-year-old law, which exempts pension from being “attached or sequestered”, though a bill seeking its abrogation from statute book has already been passed by the Lok Sabha.

After its passage in the Lok Sabha, the Repealing and Amending (Third) Bill, 2015 is pending in the Rajya Sabha.

The Law Ministry is the nodal agency for repealing laws which have lost relevance today.

A senior government functionary said that perhaps the realisation that there is no other law in the country which protects pensions led to decision against scrapping the Act.

After the DoPTs request, the Law Ministry approached the Union Cabinet to clear an official amendment to remove the Pensions Act from the repealing bill.

Section 11 of the Act states that “No Pension granted or continued by government on political considerations, or on account of past services or present infirmities or as a compassionate allowance, and no money due or to become due on account of any such pension or allowance, shall be liable to seizure, attachment or sequestration by process of any court at the instance of a creditor, for any demand against the pensioner, or in satisfaction of a decree or order of any such court.”

The two bills seek to scrap a total of 1,053 Acts which have become redundant and are clogging the statute books: PTI

Leaders from all the Central Trade Union organisations participated in the meeting. The meeting was presided by the President Confederation Tamilnadu Com. J. Ramamurthy, welcomed by Com. S.Sundaramurthy, Treasurer and the General Secretary of the Confederation Tamilnadu Com.M. Duraipandian announced the Office Bearers of the  Reception Committee and other committees.

As per the decision the Hon`ble Member of Parliament Com.T.K.Rangarajan will be  the Chairman Reception committee.  Nearly 15 Vice Chairman including Com.M.Shanmugam, General Secretary, LPF, all India president of HMS Com.C.A. Rajashridhar, Com.T.M. Murthy General Secretary, AITUC. State President of CITU, Com. A. Soundararajan, MLA, among others.  Leaders from various other organisations including Com.R. Tamilselvi, TNGEA, Com.R. Elangovan, DREU, Com.Sendhi kumar, SBI Officers Association, Com. Shanmugam from BEFI,   felicitated and extended support for the successful conduct of the conference.

M. KRISHNAN
Secretary General
Posted by Unknown at 3:11 AM