RTP CASE CAME UP FOR HEARING ON 5.11.2014 IN PRINCIPAL CAT, DELHI. DEPARTMENT SUBMITTED REPLY. NEXT DATE OF HEARING IS 18.12.2014. REJOINDER IS UNDER PREPARATION TO BE SUBMITTED FROM OURSIDE
DIRECTORATE'S ACTION PLAN FOR ONE YEAR ON “MISSION SWACHH BHARAT”CLICK HERE
RECORD RETENTION SCHEDULE IN RESPECT OF RECORDS = COMMON TO ALL MINISTRIES/ DEPARTMENTS
CLICK HERE

REVIEW OF MODEL RRS FOR THE STOREKEEPING STAFF CATEGORY OF POSTS.  CLICK HERE to view the DoPT OM

RETIRING CENTRAL GOVERNMENT BUREAUCRATS MAY BE TOLD TO WRITE 1,000-WORD ESSAY ON ACHIEVEMENTS CLICK HERE to see the Press News

COPY OF CHARGE-SHEET CANNOT BE DENIED UNDER RTI ACT: CIC

The CIC Prof M Sridhar Acharyulu held on 3rd November 2014 that ‘charge-sheet’ has to be disclosed after separating non-disclosable portions, if any, as per restrictions prescribed under RTI Act. Ms. Usha Kanth Asiwal sought to know from Director of Vigilance Delhi, details of complaint made to Anti Corruption Bureau on 25-04-2001 and  inquiry leading to registration of case against 13 persons under Prevention of Corruption Act, which is now under prosecution in Tis Hazari Courts. She sought 22 point information, which broadly relate to contents of the Charge-sheet.

The PIO denied the information u/s 8(1)(h) of the RTI Act claiming disclosure would impede investigation or prosecution.  The First Appellate Authority upheld the decision of the PIO.  She approached the Commission in second Appeal. Though demand was not for copy of charge-sheet, the appellant agreed that a copy of charge-sheet would answer his application. Then issue before the Commission was whether charge sheet was public document, and if so could that be shared under RTI Act with any citizen.

CIC Prof Sridhar Acharyulu explained: ‘The charge sheet is a report held by the investigating officer, or public authority or court of law. As per the RTI Act, any information held by the public authority can be accessed by the citizen subject to the exceptions provided under Section 8. Because the charge-sheet contains the evidence which need to be adduced in the court of law, there is a possibility of opening up many details which could be personal or private or confidential. If the allegation requires to be proved by call data, the charge sheet refers to sheets of call data, which surely contain call details unrelated to allegation. That could be private information need to be protected. Hence each charge sheet has to be separately examined and only after separating unnecessary and unrelated details of evidence, and only required and permissible information out of chargesheet should be disclosed. Thus Charge-sheet can neither be prohibited enbloc from disclosure nor disclosed totally. Charge-sheet is a document held by concerned authority, which has to examine disclosable aspects vis-a-vis Section 8 and 9 of the RTI Act and then decide the case’.

As per the Criminal Procedure, the charge-sheet is the end product of investigation. With filing of charge-sheet, the investigation is closed and defense that investigation might get impeded does not stand at all.    Whether revealing the information impedes apprehension or prosecution is the next question. The Respondent authority did not even raise this point and did nothing to explain the Commission about possibility of impeding apprehension/prosecution by disclosure.  The Public Authority just mentioned the section number and did nothing else. The First Appellate Authority also did not apply the mind and chose not to give any reasons for upholding the denial by PIO. The exemption of larger public interest provided in Section 8(1) is not available to this clause (h). Thus it has to be decided on facts whether disclosure of charge-sheet will really obstruct investigation, apprehension or prosecution. The judgment of the Delhi High Court in W.P.(C) No.3114/2007 – Shri Bhagat Singh Vs. Chief Information Commissioner & Ors on this aspect is of relevance, since it deals with the applicability of the Section 8(1)(h) of the RTI Act 2005: S Ravinder Bhat J specifically notes, “As held in the preceding part of the judgment, without a disclosure as to how the investigation process would be hampered by sharing the materials collected till the notices were issued to the assessee, the respondents could not have rejected the request for granting information. …”

It can be inferred that there is no specific provision anywhere prohibiting the disclosure of charge-sheet and if there disclosure does not affect investigation or prosecution it can be permitted under RTI, unless there is a public interest against disclosure. The chargesheets containing charges under Prevention of Corruption Act, especially against public servants, need to be in public domain, in public interest.

Citing several decisions the CIC said: There is no specific provision under any law which state that charge-sheet is a public document, but there are several judgment of the Supreme court and High court which clarify that charge sheet is a public document. Queen-Empress v. Arumugan and Ors ( (1897) ILR 20 Mad 189) has held that any person has an interest in criminal proceeding has a right to inspect under section 76 of the Indian Evidence Act. In N David Vijay Kumar v The Pallavan Gram Bank, Indian Bank in File No. CIC/SG/A/2012/000189 CIC Mr Shailesh Gandhi ordered disclosure of Charge sheet ruling out the contention of exemption under Section 8(1)(j).

On the perusal of the RTI application, the Commission found that the  information sought by the applicant are the part and parcel of the information contain in the charge-sheet prepared after the completion of the investigation under section 173 of Cr. P. C. The purpose of the appellant will be served if the copy of the same would be provided to the appellant. The respondent authority also agreed to provide the copy of charge sheet.

Considering the provisions of Cr.P.C., Evidence Act, RTI Act, erudite judicial pronouncements, certain transparency practices in CVC,  facts and circumstances of the case and contentions raised, the Commission holds that the charge sheet is a public document and it shall be disclosed subject to other restrictions provided under RTI Act. There cannot be a general hard and fast rule that every charge-sheet could be disclosed or should not be. Each RTI request for copy of Charge-sheet required to be examined and only permissible part should be given.  The Commission, hence, directed the respondent to examine the content of charge-sheet and to provide appellant/… the copy of those portions of charge-sheet, which would answer the queries raised by appellant in his RTI application, within 3 weeks from the date of receipt of the order.

CENTRAL GOVT PENSIONERS/FAMILY PENSIONERS SHOULD SUBMIT LIFE CERTIFICATE TO THEIR RESPECTIVE BANKS.  THE INFORMATION ON THE CURRENT ADDRESS AND TELEPHONE NUMBER COLLECTED FROM THE LIFE CERTIFICATES IS TO BE UPDATED ON THE BANKS MASTER DATA WITH THE CPPC.
Government of India
Ministry of Finance
Department of Expenditure
Central Pension Accounting Office
Trikoot-II, Bhikaji Coma Place
New Delhi — 110 066

Sub: Submission of Life Certificate in the month of November, 2014

Attention is invited to this Office OM No. CPAO/Tech/Pre-2006/Revision/2011-12/191 dated 23rd October, 2012 circulating therewith a copy of CPAO’s’ advertisement in English released in the leading national and regional dailies on 21st October, 2012 regarding obtaining of life certificate in the revised format by the authorized banks from the Central Civil pensioner/ family pensioner in November every year.
It was also advised that the information on the current address and telephone number collected from the Life Certificates is to be updated on the banks master data with the CPPC and the updated master data is required to be sent to CPAO not later than the last week of December every year.

Since the pensioners/family pensioners would start approaching the banks for life certificate from 1st of November, it is reiterated that all Pension Account Holding Branches must be sensitized to ensure the receipt of Life Certificate in the revised format (copy enclosed).

The updated master data must reach CPAO not later than the last week of December, 2014. The modified format of Life Certificate is also available on CPAO’s website www.cpao.nic.in at the link “Forms-For Pensioners” appearing on the left pane of Home Page. 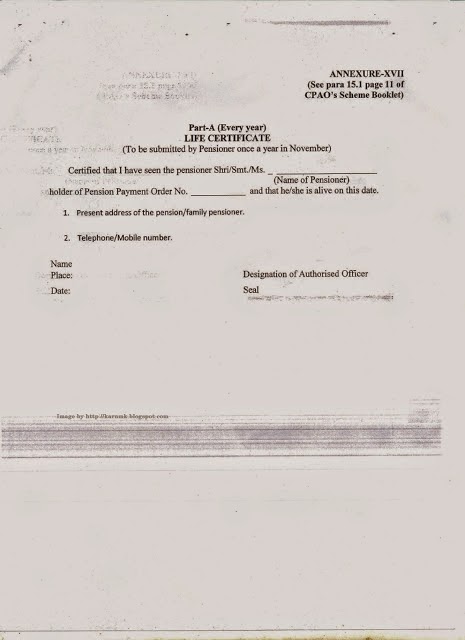 Ruling in favour of a complainant, Justice D Hariparanthaman said there cannot be any discrimination between a married son and a married daughter.
CHENNAI: Why is it that a married daughter of a deceased government employee is not eligible for appointment under compassionate grounds while a married son is eligible, Madras high court has wondered.

The matter relates to a writ petition filed by P R Renuka, stating that her father, an office assistant working in the animal husbandry department, died while he was in service in February 1998. He left behind his wife and three married daughters, besides an unmarried daughter.

Since Renuka was the eldest among them, and also because she had been deserted by her husband and living with her father at the time of the latter's death, she sought employment under compassionate grounds. She also furnished a copy of her divorce decree dated September 9, 1999.

The authorities rejected her plea on September 16, 2002 stating that she was not entitled for a compassionate appointment because she was married.

Noting that her divorce came after her father's death, the government informed the court that only an unmarried daughter and or one who was a divorcee at the time of her father's death were eligible for appointment under compassionate grounds.

Rejecting the contention, Justice Hariparanthaman pointed out that the woman had stated that even before her father's death, she had been living with her parents. Also, the only reason given by authorities to reject her claim to appointment was because she was married.

"When she has come with a plea that she was deserted by her husband and a decree of divorce was granted, and that she was under the care and control of her father at the time of his death, the government cannot deny compassionate appointment on the ground that the divorce was obtained after the death of her father," said Justice Hariparanthaman.

Quashing the rejection order, the judge then directed the authorities to provide a compassionate ground appointment to Renuka in eight weeks.