PHOTOS OF TRIENNIAL CONFERENCE OF C-O-C OF CONFEDERATION MUMBAI (MAHARASHTRA) AT AYAKAR BHAVAN MUMBAI ON 18.11.2016 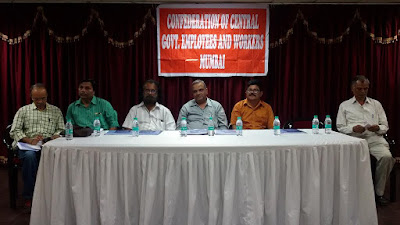 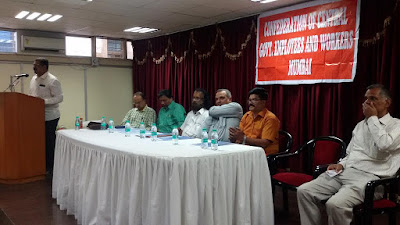 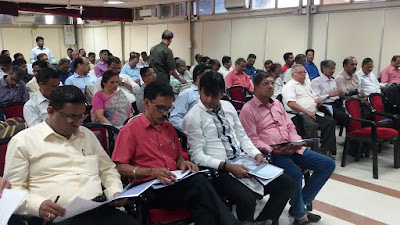 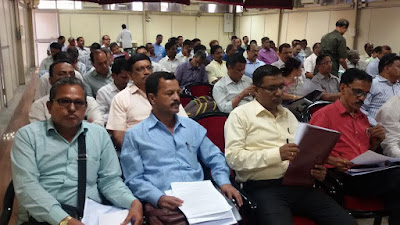 Posted by NFPE at 4:08 PM No comments: Links to this post 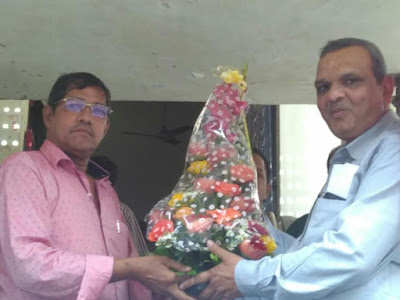 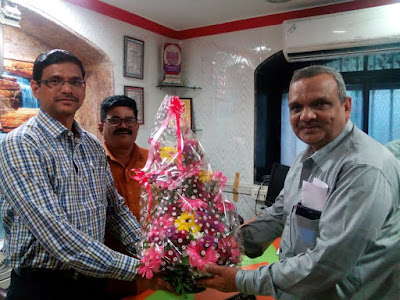 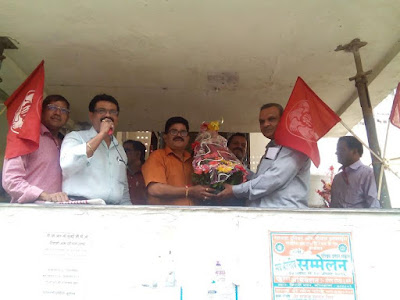 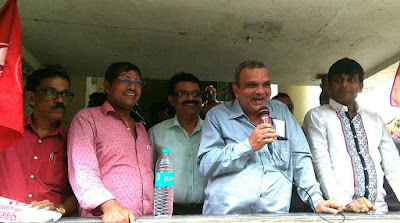 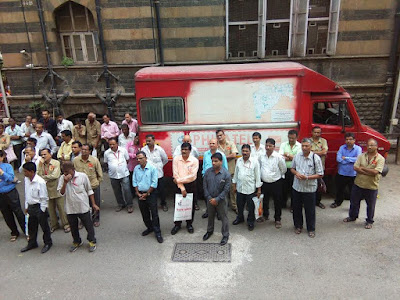 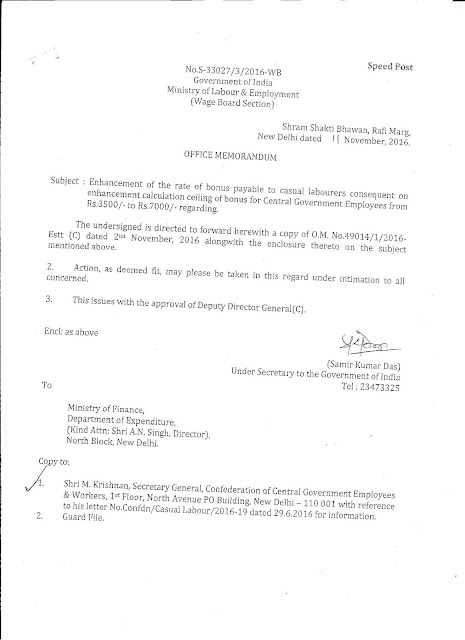 SALARY ADVANCE IN CASH. NO OPTION REQUIRED FOR CASH PAYMENT

Read para 2 of Fin. Min. OM – “In case no option is received by the said date, it will be presumed that the employees has opted for cash pay-out and payment thereof will be disbursed in cash accordingly”. 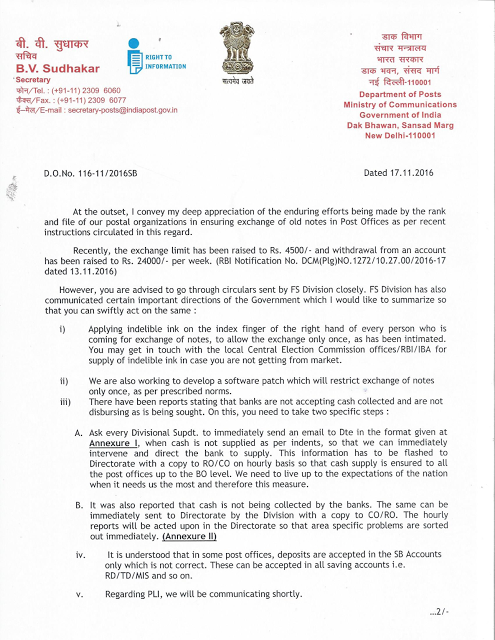 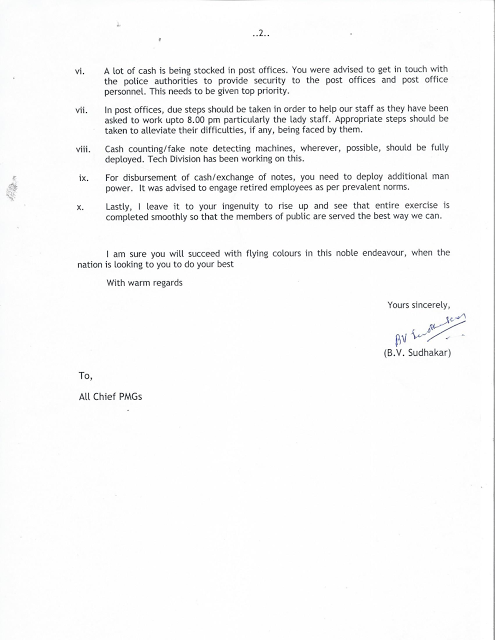 FINANCE MINISTRY ISSUED ORDERS TO PAY RS.10,000 IN CASH AS SALARY ADVANCE FOR NON-GAZETTED EMPLOYEES FOR THE MONTH OF NOVEMBER 2016

All affiliated organisations of Confederation are requested to take up the case with their Departmental Heads & ensure holding of Departmental Council immediately. 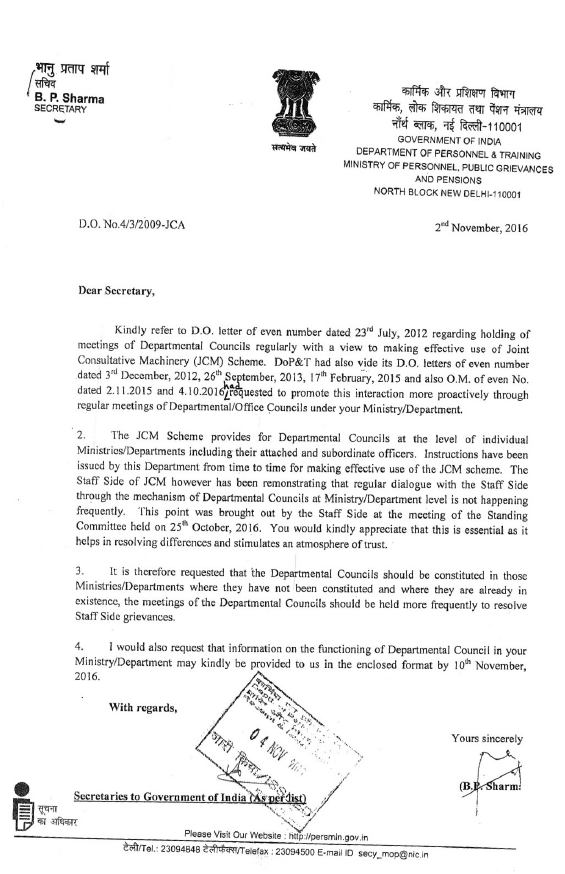 A meeting of PJCA comprising NFPE, FNPO, AIPEU-GDS & NUGDS was held at NFPE office North Avenue Post Office Building, New Delhi on 16th November, 2016 under the presidentship of Shri D. Theagarajan Secretary General FNPO. All General Secretaries of both the Federations participated in the meeting. After threadbare discussion the following resolution, programme of action and Charter of Demand was finalized.

This PJCA further notes that in the Postal department also due to the negative attitude of the Government and Postal administration long pending demands are remaining unsettled. None of the 7th CPC related demands of various cadres of Postal department are settled. Regularization of Gramin Dak Sevaks and grant of all benefits of regular employees on pro-rata basis is still pending. The New Pension Scheme (NPS) has created uncertainty among the employees recruited after 01.01.2004, about their pensionary benefits. Department has unilaterally issued orders for outsourcing booking and delivery of registered, speed post and express parcel post articles and engaging staff on each Sunday & holiday to deliver parcels of e-commerce companies . The task force committee recommendations are not yet dropped, no effective remedial measures are taken to streamline the functioning of CBS/CSI, revision of wages and payment of arrears of casual labourers from 01.01.2006 is still pending in many circles, more than 60000 vacancies in various cadres including promotional posts are remaining unfilled.  Now due to monetization Scheme more difficulties are being faced by the staff due to lack of proper infrastructure and engaging staff beyond duty hours. All the above issues are agitating the minds of the employees for a long time.

The PJCA after reviewing the situation prevailing in the Postal department came to the unanimous conclusion that to settle the above issues, serious agitational programmes are to be launched. Accordingly the PJCA resolve to implement the following phased programme of action.

1.    Settle the demands of various cadres of Postal department relating to 7th CPC recommendations submitted to Secretary, Posts in memorandum dated 08.12.2015.
2.    Implement cadre restructuring in all remaining cadres in the Department of Posts and settle the residual issues arising at implementation stage. Finalize RRs in MMS Cadres.
3.    Grant Civil Servant status to Gramin Dak Sevaks and grant all benefits of departmental employees on pro-rata basis.
4.    Revision of wages and payment of arrears from 01.01.2006 to all casual, part-time, contingent and daily-rated mazdoors and regularization of services.
5.    Fill up all vacant posts in all cadres including promotional posts  and GDS.
6.    Conduct membership verification of Gramin Dak Sevaks and declare the result of the verification already conducted among departmental employees during 2015.
7.    Revision of OTA & OSA and fixation of norms for CRC/Speed post and Parcel in RMS and FMC  for Postman Cadre .
8.    Settle problems arising out of implementation of CSI and CBS.
9.    Grant of upgraded 3050 pay scale to Postmen w.e.f. 1.1.1996 as per Supreme Court Judgment.
10.  Withdraw “Very Good” bench mark condition for MACP and future increments and holding of DPCs timely..
11.  Grant of S D.A. & HCA to the Assam & NE & remove discrimination.
12.  .Problems arisen out of demonetization Scheme and grant additional remuneration of full day salary for Sunday/Holiday and hourly rate for extended duty hours. Provide proper infrastructure including fake currency detector and counting machines. Not to direct the  officials to make  good the loss where fake currency  machines are not provided.

13.  Stop Sunday/Holiday working completely.
14.   Discussion on     Memorandum of AIPSBCOEA.
15.  Declaration of Result of LGO & other LDCEs in remaining Circles.
16.  Finalization of Recruitment Rules of AAO Cadre in Postal Accounts.
17.  Repairing and Maintenance of Departmental Buildings.

Revision of pension of pre-2006 pensioners – delinking of revised pension from qualifying service of 33 years – Confederation writes to Ministry of Personnel, PG & Pensions 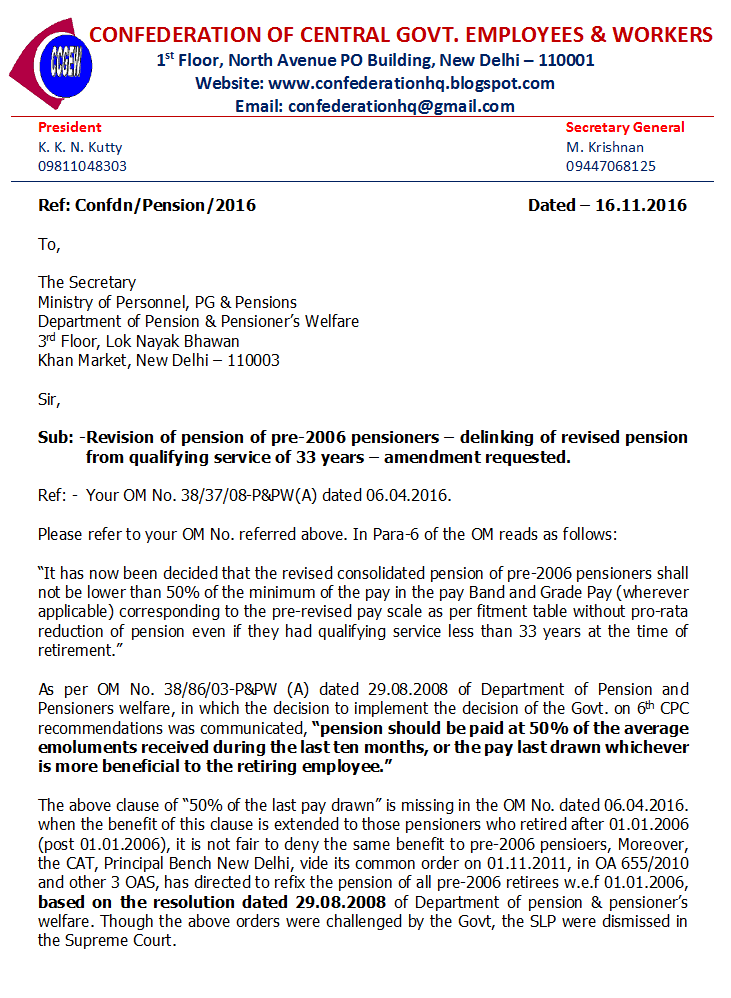 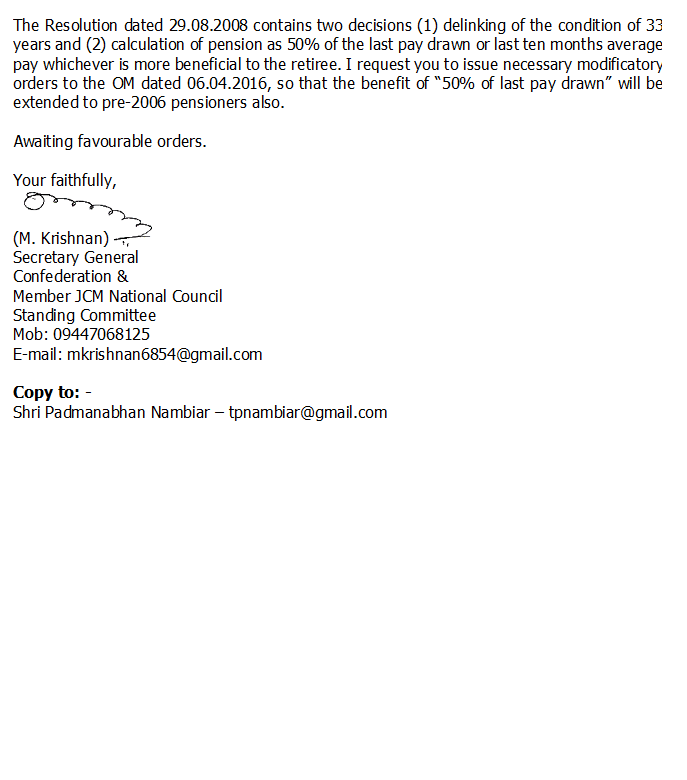 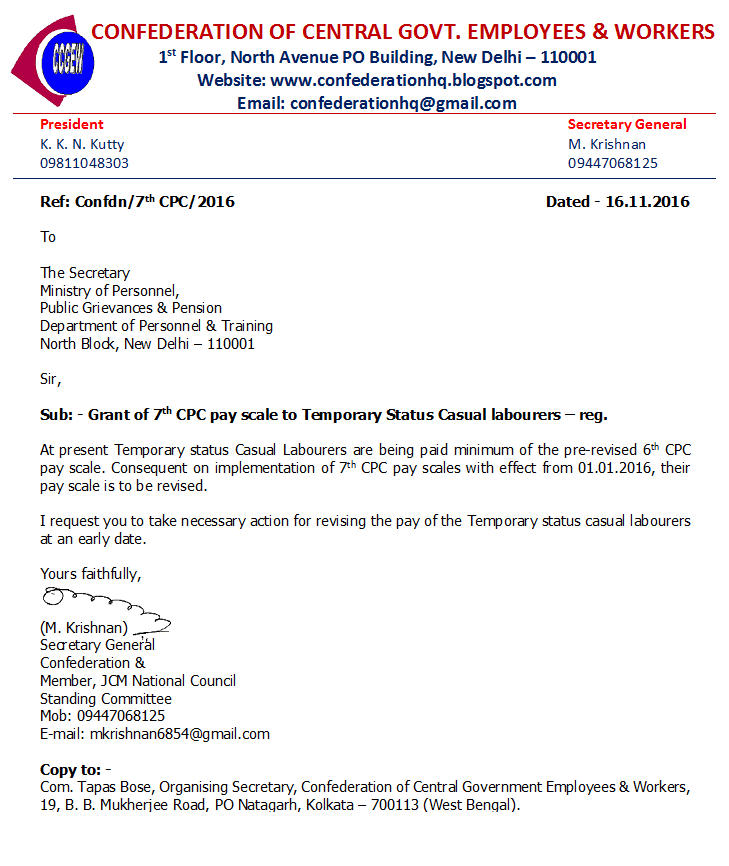 Grant of 7th CPC Pay scale to those who are appointed on compassionate grounds and drawing pre-revised pay scale (without Grade pay) for want of matriculation qualification - Confederation writes to Ministry of Finance.

Grant of Dearness Relief to Central Government pensioners/family pensioners - Revised rate effective from 1.7.2016 on implementation of decision taken on recommendation of 7th Central Pay Commission. (Click the link below to view order)

Posted by NFPE at 11:59 AM No comments: Links to this post 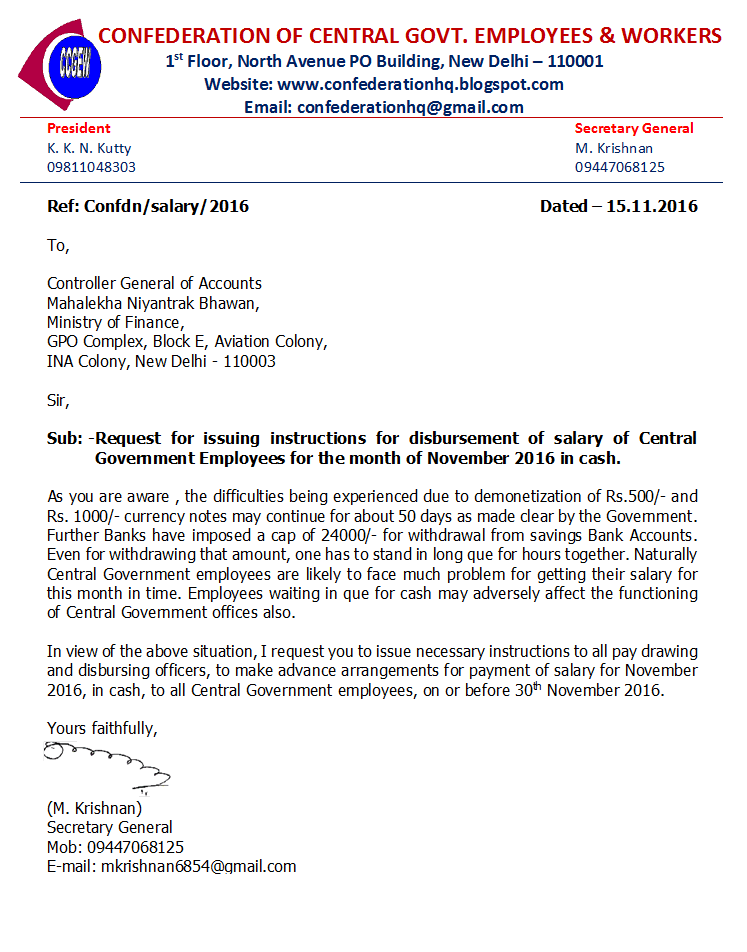